Bangladesh yet to play their best cricket says Tamim

Bangladesh might have come within sniffing distance of reaching the quarterfinals of the World Cup but aggressive opener Tamim Iqbal feels the Tigers are yet to play their best cricket in the tournament. 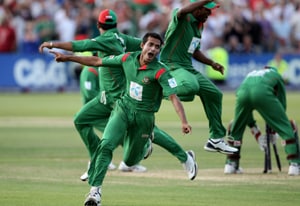 Bangladesh might have come within sniffing distance of reaching the quarterfinals of the World Cup but aggressive opener Tamim Iqbal feels the Tigers are yet to play their best cricket in the tournament.

Bangladesh have six points from five matches and will will qualify for the knock-out rounds of the tournament if the West Indies beat England in Chennai on Thursday. However if England win, the Tigers will have to score an upset victory over formidable South Africa in their concluding Group B match at the Sher-e-Bangla stadium on Saturday to make it to the last eight stage.

"We have not played our best cricket yet. We can do better than that and we will try to do that against South Africa," Tamim told reporters in Dhaka.

"If we can make the quarter-finals, it will be great because that was the team's target before the tournament," he added.

Bangladesh have so far defeated England and the two associate nations -- the Netherlands and Ireland -- to occupy the fourth position just ahead of of England. They lost to title favourites India in the tournament-opener and then crashed to their lowest one-day total of 58 against the West Indies.

"Even if we don't play the quarter-finals, it will not take anything away from us. Our aim was to win at least three matches and we have already achieved that target. If we can get one more that will be fantastic," the aggressive left-hander said.

On the team's morale, Tamim said, "It is not that the morale is at an all-time high. But there is a good feeling among the boys and there is a good environment at the moment. "Everyone is wanting to do well and training very hard and trying to improve."

On his own form in the tournament, Tamim, who scored a 70 against India in the opening match, said, "I have scored 70 and two innings of around 40. Three years back everyone would have been happy with that. But I have raised my own standards, so you now see my 40s as a failure."

Comments
Topics mentioned in this article
Bangladesh Cricket Team World Cup 2011 West Indies Cricket Team India Cricket Team Sachin Ramesh Tendulkar Tamim Iqbal Virender Sehwag Cricket
Get the latest updates on ICC T20 Worldcup 2022 and CWG 2022 check out the Schedule, Live Score and Medals Tally. Like us on Facebook or follow us on Twitter for more sports updates. You can also download the NDTV Cricket app for Android or iOS.