Bangladesh's three left-arm spinners combined to restrict the reckless Netherlands to a modest score of 160 in 46.2 overs in the World Cup on Monday. 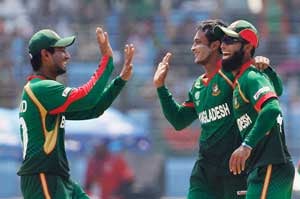 Bangladesh's three left-arm spinners combined to restrict the reckless Netherlands to a modest score of 160 in 46.2 overs in the World Cup on Monday.

Abdur Razzak picked up 3-29 in 10 overs, while skipper Shakib Al Hasan and Suhrawadi Shuvo, who was brought in to replace off-spinner Naeem Islam, claimed one wicket apiece.

Bangladesh, who have four points from as many matches and face powerful South Africa in their last league game, need a win to improve their chances of making the quarterfinals from Group B.

The Dutch, facing a fifth consecutive defeat, caved in after skipper Peter Borren elected to take first strike on the slow wicket at the packed Zahur Ahmed Chowdhury stadium.

A sell-out crowd of 18,000, taking advantage of the public holiday declared for the match, cheered loudly as the Netherlands kept losing wickets against the tight Bangladesh bowling.

Ryan ten Doeschate top-scored with an unbeaten 53, but none of the other batsmen managed 30, six failed to reach double figures and four ran themselves out.

The Dutch plodded to 17-0 in the first seven overs after seamer Shafiul Islam bowled a steady line to concede just two runs in four overs.

Wesley Barrisi put on 28 for the first wicket with Eric Szwaraczynski in nine overs before he was trapped leg-before by Shakib after making 10.

Mudassar Bukhari, promoted as pinch-hitter, lofted Shakib for a boundary but fell trying another big heave off Razzak as wicket-keeper Mushfiqur Rahim easily gobbled up the skier.

Tom Cooper and Szwaraczynski carried the score to 66-2 by the 23rd over when both batsmen were run out in the space of 13 runs to set the Dutch back again.

Szwaraczynski, who made 28, was unfortunate to be dismissed at the non-striker's end when Shakib deflected a straight drive from Cooper onto the stumps.

Rahim, who had dropped Cooper on six, made amends when he lunged for a wide throw from the deep and threw the ball at the stumps before the batsman had regained his crease.

The New South Wales-born Cooper, who turns out for South Australia in domestic cricket, made 29.

Shuvo had Alexei Kervezee stumped by Rahim for 18, before Razzak dismissed Tom de Grooth and Atse Buurman in three deliveries to reduce the Netherlands to 127-7 in the 38th over.

Borren and Adeel Raja also ran themselves out, leaving ten Doeschate stranded at the other end.

Comments
Topics mentioned in this article
Netherlands World Cup 2011 Peter Borren Cricket Bangladesh Cricket Team France Mexico Portugal Shakib Al Hasan Canada Belarus Netherlands
Get the latest updates on ICC T20 Worldcup 2022 and CWG 2022 check out the Schedule, Live Score and Medals Tally. Like us on Facebook or follow us on Twitter for more sports updates. You can also download the NDTV Cricket app for Android or iOS.