Prime Minister Sheikh Hasina has criticised Bangladeshi fans for stoning the West Indies team bus after the home side was humiliated in the World Cup. 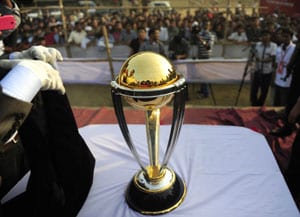 Prime Minister Sheikh Hasina has criticised Bangladeshi fans for stoning the West Indies team bus after the home side was humiliated in the World Cup.

The attack on the West Indies bus was "undesirable" and such behaviour could affect Bangladesh's chances of hosting further major events, Hasina told a political rally late Monday.

The Prime Minister urged fans to be patient after any home defeat, saying it was "not acceptable that you will garland the players if they win and pelt them with stones if they lose," she said.

Bangladesh were bowled out for just 58 in the match against the West Indies on Friday, their lowest one-day total, before losing by nine wickets. The defeat severely dented the home side's hopes of making the quarter-finals.

Bangladesh is co-hosting the 10th edition of the World Cup along with India and Sri Lanka. It earned praise for putting on a colourful opening ceremony, but the attack on the West Indies bus tarnished their image.

International Cricket Council chief executive Haroon Lorgat condemned the attack but said there were no immediate plans to move games.

The bus came under attack as it was heading back to the West Indies' team hotel after the match, in what police said was a case of mistaken identity, with fans thinking it was the home team's vehicle.

Lorgat said the ICC had no immediate plans to move matches from Bangladesh, with England and South Africa still to play group fixtures in the country against the Tigers.

He insisted the attack was a minor incident, with just a few pebbles hurled at the vehicle.

But West Indies coach Ottis Gibson said the incident was a serious breach of security which caused the West Indies players to take cover on the floor of the bus.

He blasted International Cricket Council boss Haroon Lorgat as "ridiculous" on Sunday for attempting to play down the stoning controversy.

Bangladesh immediately ramped up security at venues and in streets leading to the main stadiums. Police and the elite Rapid Action Battalion officers have also arrested 38 people in connection with the stoning incident.

Police said the stones were thrown from distance and that fans thought it was the Bangladeshi team bus they were attacking. Two windows were smashed on the bus but there were no injuries.

Comments
Topics mentioned in this article
Ravi Rampaul MS Dhoni Bangladesh Cricket Team Gary Kirsten World Cup 2011 Cricket
Get the latest updates on India vs South Africa and check out  Schedule, Results and Live Score. Like us on Facebook or follow us on Twitter for more sports updates. You can also download the NDTV Cricket app for Android or iOS.