Bangladesh media came down heavily on skipper Shakib Al Hasan and his team on Sunday after the Tigers crashed out of the World Cup in disgrace. 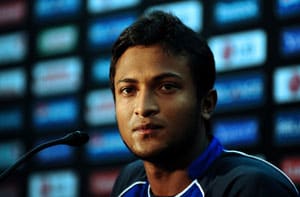 Bangladesh media came down heavily on skipper Shakib Al Hasan and his team on Sunday after the Tigers crashed out of the World Cup in disgrace.

Bangladesh were shot out for 78 chasing South Africa's 284-8 in a must-win game on Saturday to stun 25,000 home fans at the Sher-e-Bangla stadium and millions watching on television.

"One feels sorry for the faithful who spent sleepless nights in queues for tickets and braved every hurdle imaginable to flock to the stadium," the Dhaka-based Independent wrote.

"They at least deserved the sight of a side going down with a fight."

The paper slammed the inept batting display that came two matches after Bangladesh slumped to their lowest one-day total of 58 against the West Indies earlier in the tournament.

"If once, it can be put down to a bad day in the office, but two occasions of landing in the dubious list of lowest World Cup totals is inexplicable," it said.

"Even Ireland haven't been bowled out so badly."

The same paper wondered if Bangladesh's first round exit will reopen the debate on whether the Tigers deserve to be playing top flight cricket.

"There are obvious gaps and limitations in skills and mental strength," it said.

The Daily Star pointed fingers at Shakib's stubborn refusal to acknowledge the team's batting failures despite modest totals in all matches after making 283-9 against India in the opening game.

"Shakib's constant proclamation that there was nothing wrong with the team's batting was strange when clearly it was nothing to write home about," the paper wrote.

"Call it a ploy to motivate the batsmen, or his stubborn behaviour with the media, it backfired both ways as the batsmen failed to be inspired or leave anyone impressed.

"There is little doubt over his quality as a cricketer, a captain and a human being, but Shakib should take this World Cup as the perfect lesson in handling success and failure properly."

The same paper reminded its readers that minnows Namibia was the last team to be bowled out twice for less than 100 in a World Cup.

"The last thing the team needed was a tag of being 'unpredictable', but that is what the Tigers will go out with from this World Cup," the Daily Star said.

"The month-long appearance in the sport's biggest event has been a huge learning curve for this young team.

"That is, if they are willing to learn."

Comments
Topics mentioned in this article
World Cup 2011 Bangladesh Cricket Team Cricket
Get the latest updates on ICC T20 Worldcup 2022 and CWG 2022 check out the Schedule, Live Score and Medals Tally. Like us on Facebook or follow us on Twitter for more sports updates. You can also download the NDTV Cricket app for Android or iOS.