Cricket fever in Bangladesh appeared to be over after the national team crashed out of the World Cup with few takers for Wednesday's quarterfinal between Pakistan and the West Indies. 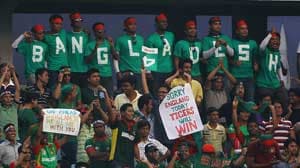 Cricket fever in Bangladesh appeared to be over after the national team crashed out of the World Cup with few takers for Wednesday's quarterfinal between Pakistan and the West Indies.

For the first time in the tournament, the usually bustling Sher-e-Bangla stadium wore a deserted look when the captains went out to toss under a hot sun for the day-night match.

Barely 5,000 local fans were in attendance at the 25,000-seater stadium, which had earlier seen full houses in the four league matches Bangladesh played in Dhaka.

The Tigers failed to make the quarterfinals after two major batting failures when they were bundled out for their lowest one-day total of 58 by the West Indies and fell for 78 against South Africa.

"It's a working day and I will be surprised if more than 10,000 turn up by evening," local media official Rabeed Imam told AFP.

"It seems the fans have lost interest in the tournament after their team went out."

The attendance for Friday's other quarterfinal between South Africa and New Zealand could be even lower even though that match will be played on the weekly holiday in Bangladesh.

Tickets for the two quarterfinals were sold out weeks ago, but many still chose to ignore the game - or preferred watching it from the comfort of their offices or homes.

"Those who have taken the trouble to come must obviously be big fans of the Pakistani team," said businessman Sikdar Rahman, who was present at the stadium.

"Because I have not met anyone who wants to support the West Indies."

Darren Sammy's men first heaped ridicule on the Tigers by bowling them out for 58, and then lost to England when a win would have taken Bangladesh through to the knock-out stage.

Chartered accountant Yasin Ali said he thought twice before deciding to come for the match.

"Everyone is heart-broken because our team is not there," he said. "But I am at the stadium because I did not want my ticket to go waste."

Dhaka journalist Shawkat Hossain, however, chose to stay away.

Comments
Topics mentioned in this article
Chris Gayle Saeed Ajmal Bangladesh Cricket Team West Indies Cricket Team Pakistan Cricket Team Kemar Roach World Cup 2011 Cricket
Get the latest updates on ICC T20 Worldcup 2022 and CWG 2022 check out the Schedule, Live Score and Medals Tally. Like us on Facebook or follow us on Twitter for more sports updates. You can also download the NDTV Cricket app for Android or iOS.