Ireland open their World Cup campaign against Bangladesh on Friday determined to clinch a hat-trick of victories over the Tigers in major events. 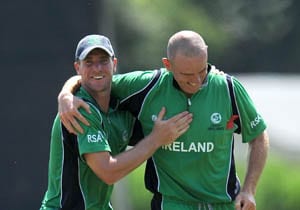 Ireland open their World Cup campaign against Bangladesh on Friday determined to clinch a hat-trick of victories over the Tigers in major events.

Ireland defeated Bangladesh by 74 runs in the now-scrapped Super Eights round in the 2007 World Cup in the Caribbean and then won by six wickets in the World Twenty20 in England in 2009.

Bangladesh cannot afford another defeat, having lost their opening match against India by 87 runs last Saturday, setting the stage for a keenly contested day-night match.

Playing before 25,000 boisterous Bangladeshi fans at the packed Sher-e-Bangla stadium on Friday night will test Irish resolve, but the leading non-Test side know what awaits them.

Ireland lost all three one-day internationals during a series at the same venue in 2008, but wicketkeeper-batsman Niall O'Brien said those defeats will not make a difference.

"That was a long time ago," he said. "We have beaten Bangladesh three of the last four times we have played them. Our confidence is high because we know we have a good enough team to win here.

"We have to play the Bangladesh spinners, especially Abdur Razzak and skipper Shakib Al Hasan, with the respect they deserve, but at the same time we have to be proactive and quite aggressive."

Ireland's squad includes nine players who took part in the memorable 2007 outing, where they knocked out Pakistan from the first round before taking Bangladesh in their stride.

The Irish will be boosted by the presence of batsman Ed Joyce, who played 17 one-dayers for England before opting to turn out for the land of his birth.

Former West Indian batsman Phil Simmons, who now coaches Ireland, believed the current side is stronger than the one that played in the previous World Cup.

"The difference this time is that 13 of the 15 players earn their living from cricket, that's practically a full-time squad," said Simmons.

"We may have lost the surprise factor, but we have earned the respect of the cricketing world through our efforts."

The Irish showed they had adjusted to the unfamiliar conditions of the subcontinent when they beat Zimbabwe by four wickets in a practice match after losing a high-scoring game to New Zealand by 32 runs.

Meanwhile, Bangladesh were quietly optimistic ahead of Friday's match that they must win to resurrect their campaign after the loss to India.

The co-hosts must beat both the non-Test nations, Ireland and the Netherlands, and one of the established sides from England, South Africa and the West Indies, to progress to the next round.

Bangladesh emerged from the defeat against India with a few positives, including a spirited chase of the massive 371-run target as Tamim Iqbal made 70 and Shakib hit a fluent 55 off 50 balls.

But the Tigers' bowlers took a beating at the hands of the rampaging India, with seamer Shafiul Islam going for 69 runs in his seven overs and new-ball partner Rubel Hossain conceding 60 runs in 10 wicketless overs.

"In the World Cup there are no easy matches," said Tamim. "We know Ireland's strengths and weaknesses. If we can execute our plans we will definitely win."

Comments
Topics mentioned in this article
World Cup 2011 Ireland Cricket Team Bangladesh Cricket Team Shakib Al Hasan Niall O'Brien William Porterfield Cricket
Get the latest updates on India vs South Africa and check out  Schedule, Results and Live Score. Like us on Facebook or follow us on Twitter for more sports updates. You can also download the NDTV Cricket app for Android or iOS.