England batsman Ian Bell said that the Bangalore crowd inspired him and his fellow team members to put up a fight against India during their match played on Sunday. 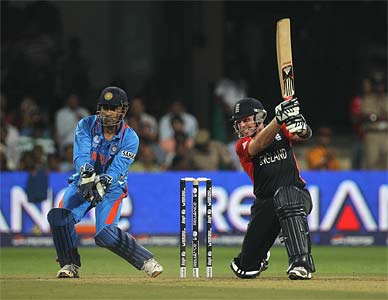 England batsman Ian Bell said the intimidating crowd here Sunday inspired them not to buckle under pressure in the tied World Cup match against India.

Bell, who hit a crucial 69 and shared a record-breaking 170-run third-wicket partnership with Andrew Strauss, said it was a privilege for him to be a part of the humdinger that ended in a dramatic last ball tie.

"It was a privilege for me to have been involved in that game. For me it was one of the best ODIs I have played in and probably a great game in the World Cup so far," said Bell.

Bell said that the draw should give them the much needed confidence as they were coming from 6-1 against Australia in a ODI series prior to the World Cup.

"Hopefully we can take a lot of confidence from it. We played much better than we did against the Netherlands, and we can now move ahead to play better cricket in future ganmes. We can take a hell of a lot from the India game," he said.

Bell admitted that he never believed that England will get to 338.

"I don't think too many England teams in the past would have done that or would have even thought about that. It shows the confidence in the team and proves that we have the quality in bowling and fielding. If we can keep doing that we can match anyone."

Comments
Topics mentioned in this article
World Cup 2011 Australia Cricket Team Cricket England Cricket Team West Indies Cricket Team Ian Bell
Get the latest updates on ICC T20 Worldcup 2022 and CWG 2022 check out the Schedule, Live Score and Medals Tally. Like us on Facebook or follow us on Twitter for more sports updates. You can also download the NDTV Cricket app for Android or iOS.