Ashish Bagai, the Canada captain, has said that if cricket has to grow as a sport in Canada the locals have to take up the game. 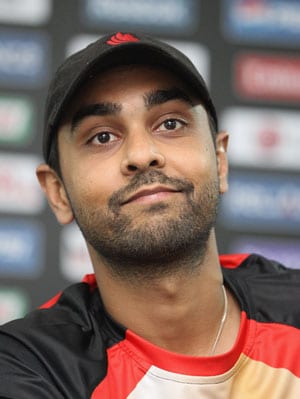 Ashish Bagai, the Canada captain, has said that if cricket has to grow as a sport in Canada the locals have to take up the game. "Cricket is mainly played by expats from India, Pakistan, West Indies, Sri Lanka and Australia and our team is representative of that cricket culture," Bagai said after Canada's loss to Australia in their last game of this World Cup. "It's important to get the locals to play if we are to get support from corporates or the government."

Canada doesn't have a domestic structure in place and Bagai sought help from the ICC and the Test-playing countries to improve the state of cricket in Canada. "We need to keep playing competitive cricket over the next few years. It would be great if we can have A-team tours from other countries, or get to participate in domestic competitions elsewhere."

Bagai pointed how all the four Associate teams have shown improvement as the tournament progressed and cited it as evidence for the need for more exposure. "The guys from the four teams have started to come out of their shells. Six games are not enough to do that. We need to keep playing competitive cricket over the next four years."

Some of the Canada players take part in the Sri Lankan domestic circuit, and Bagai said they needed more such initiatives; else they might lose young players like Hiral Patel. Bagai said playing on the English county circuit could do wonders, but Canada don't have an easy entry. "The European players get to play as locals in England but we need to play as overseas players and therefore it is not easy to get contracts." English counties can only play two overseas players in the domestic Twenty20 competition and one in four-day games.

Canada did participate in the Caribbean Twenty20 tournament in the West Indies earlier this year, and finished fourth in their group.

Bagai also spoke about the initiatives that the Canada board is undertaking to spread the game. "The board is trying to instill it in grass-roots levels, in schools and trying to get the locals to play."

Looking back at the tournament Bagai chose the bowling as the highlight. "Our bowlers were fantastic; they were world-class. Some of the young batsmen got good knocks which will hold them well in the future. They need to use it and keep working hard over the next few years. The overall experience of playing this tournament has been a great one. We have to keep improving and make Canada a lot stronger in the next five years."