Reigning champions Australia eased into the quarter-finals of the World Cup with a 60-run victory over Group A makeweights Kenya at the Chinnaswamy Stadium on Sunday. 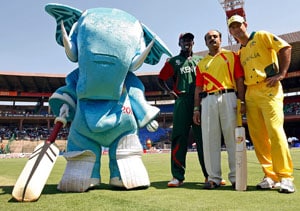 Australia's World Cup campaign resumed with an ultimately comfortable 60-run victory against Kenya although Collins Obuya's unbeaten 98 meant the Associate nation took pride out of the contest. An upset was never on the cards but Kenya put in their best performance of the tournament with the highlight being the 115-run stand between Obuya and Tanmay Mishra.

The imposing run chase had been set up by a 114-run partnership from Michael Clarke and the returning Michael Hussey in his first innings of the World Cup. It actually gave Australia some important breathing space, but Kenya had long-since given up any hope of chasing down 325 on the ground where Ireland shocked England earlier in the tournament.

The most tension came in the closing overs seeing of Obuya could reach his maiden one-day century - and Kenya's first at a World Cup - but he failed to get the three runs he needed off the last two balls. However, Ricky Ponting will be acutely aware that his team were far from impressive especially in the field. The bowlers, except for Brett Lee, certainly looked rusty as Kenya posted their best World Cup total.

After an early strike each for Lee and Shaun Tait it appeared Kenya would fall in a heap. Maurice Ouma edged a good outswinger and Alex Obanda, after driving Tait over long on with one of the shots of the tournament, missed an ugly heave at a quick full toss. When the Obuya brothers mislaid their sibling understanding which resulted in David's run out there was an opportunity for a swift finish.

However, Collins refocused after the mix-up and firstly provided solid support for Mishra in Kenya's sixth World Cup hundred stand before forming another strong partnership with the aggressive Thomas Odoyo who struck the ball cleanly. Obuya, who became famous for his legspin heroics at the 2003 World Cup, passed his fifty with a wonderful lofted drive over long off against Shane Watson then took advantage of the batting Powerplay. He twice pulled Watson's medium pace for six but couldn't quite the final boundary he needed for three figures.

In Mishra, Kenya also have someone who provides hope for the future. On a day where Tikolo, the grand old father of Kenyan cricket, was left out Mishra showed he has a huge role to play of the game is to recover in the country. He showed some class with swift footwork against Steve Smith to firstly pull him over midwicket for six then loft him through the off side and played a similar stroke against Jason Krejza.

His fifty came off 63 balls and he set a new career-best mark when he reached 67. This isn't the Australia attack of previous World Cup but it remains a handy unit. There was a chance for Mishra to convert into a notable century when he was caught short by Clarke's dead-eye throw from backward point, but he had ensured his team respectability.

The biggest bonus for Australia was the performance of Hussey, who replaced his brother David in the line up, on his return from injury having come into the squad for Doug Bollinger. At 143 for 4, Australia needed a solid partnership and Hussey, getting off the mark with a first-ball boundary, formed a confident partnership with Clarke.

Hussey didn't drop below a run-a-ball during his stay and although he'll face far tougher tasks than this Kenya attack, it was a more valuable innings than any net session could provide. He was quick on his feet, gave the hamstring a good test with a few dives for the crease and his placement was as calculated as it always has been.

Clarke, meanwhile, ticked over with minimal fuss after feeling his way in against the spinners on a surface that offered turn to maintain his World Cup average of over 100. After Hussey departed Clarke began to open up during the batting Powerplay and collected four boundaries in quick succession including a six over midwicket. He'd equalled his highest score in World Cup matches when he couldn't quite clear long-on to give the deserving Nehemiah Odhiambo his third wicket.

The lack of middle time for the batsmen could well have played a part in Ponting's decision to bat and Watson was quickly out of the blocks until he top edged to the keeper. Australia then went through a period where seven overs brought 14 runs and Brad Haddin was having particular trouble forcing the pace as he kept hitting the field and was fortunate when an edge flew past slip on 16, while he could have been run out on 25 when his bat got stuck in the adjacent pitch.

Steadily, though, the pair increased the scoring rate and Haddin brought up his fifty off 63 balls with a deft glide to third man only to pick out long-on attempting his second six. That began a good period for Kenya as Obuya trapped Ponting lbw for a scratchy 36 after correctly opting to review the original not-out decision. Cameron White, who retained his place ahead of David Hussey, continued his lean run when he was beaten by a ripping delivery from Jimmy Kamande and both he and his captain will want a significant innings against Canada on Wednesday.

Comments
Topics mentioned in this article
World Cup 2011 West Indies Cricket Team Netherlands Australia Cricket Team Kenya Cricket
Get the latest updates on India vs South Africa and check out  Schedule, Results and Live Score. Like us on Facebook or follow us on Twitter for more sports updates. You can also download the NDTV Cricket app for Android or iOS.