Australia captain Ricky Ponting indicated the champions were set to field the same side when they faced Canada in their penultimate group match on Wednesday. 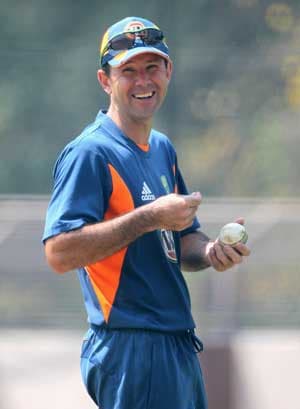 Australia captain Ricky Ponting indicated the champions were set to field the same side when they faced Canada in their penultimate group match on Wednesday.

The title-holders eased into the quarterfinals with an unconvincing 60-run win against the North Americans' fellow non-Test nation Kenya at Bangalore's Chinnaswamy Stadium on Sunday.

Ponting's decision to bat first on winning the toss and Kenya's spirited effort in making 264 for six in reply to Australia's 324 for six ensured the match went the full 100 overs.

The game was Australia's first complete match in more than a fortnight following their no-result washout last weekend against co-hosts Sri Lanka.

But several frontline batsmen, including Ponting himself, did not spend as much time in the middle as they would have liked while all of Australia's spinners went wicketless.

Australia, bidding for a fourth straight World Cup title and fifth in all, may be the only unbeaten side but they have yet to be tested ahead of their final Group A match against Pakistan in Colombo on Saturday.

The result of that match could have a major bearing on Australia's quarter-final opponents, with the title holders' net run-rate - something damaged by Kenya's defiance with the bat - a potential factor.

Ponting, asked if Australia were contemplating changes for the Canada clash, replied: "No, I don't think so. We've got to look a step forward now as well.

"A couple of guys who needed a bit of time didn't necessarily get it. I don't think it will really change our thinking for the next game."

One thing Ponting will want to see on Wednesday is an improved display by his slow bowlers after leg-spinner Steven Smith, off-break bowler Jason Krejza and left-armer Michael Clarke's combined 19 wicketless overs against Kenya cost 93 runs.

"Through those middle overs in this tournament when the ball gets old, and the wicket starts to spin, we are going to need our spinners to strike for us, and that didn't happen against Kenya," Ponting said.

However, Australia did receive a big boost in seeing Michael Hussey mark his first appearance of the tournament with a typically composed fifty.

It had seemed the veteran left-hander would miss this World Cup because of hamstring trouble but he was summoned to the subcontinent as a replacement for injured fast bowler Doug Bollinger.

"It looked like he hadn't missed a beat," Ponting said of Hussey, selected instead of younger brother David Hussey. "It's a great sign for us."

Canada, who beat Kenya by five wickets for their only win of the tournament so far, should be heartened by their rival associates' performance against Ponting's men.

But they suffered a 97-run thrashing by New Zealand on Sunday although that match did see captain Ashish Bagai make 84 and Jimmy Hansra an unbeaten 70.

However, it was the fact Canada conceded a huge total of 358 for six that most concerned Bagai.

"We bowled too short, too wide," he said. "That put the team under pressure. We didn't bowl in the right areas and the fielding was probably the worst we had in a long time."

Comments
Topics mentioned in this article
Ricky Ponting World Cup 2011 Cricket Fernando Alonso Australia Cricket Team Canada Cricket Team
Get the latest updates on ICC T20 Worldcup 2022 and CWG 2022 check out the Schedule, Live Score and Medals Tally. Like us on Facebook or follow us on Twitter for more sports updates. You can also download the NDTV Cricket app for Android or iOS.