Aussies vow no let-up against Canada

Defending champions Australia have already qualified for the World Cup quarterfinals but are eyeing a thumping win over Canada on Wednesday as the race to top the group heats up. 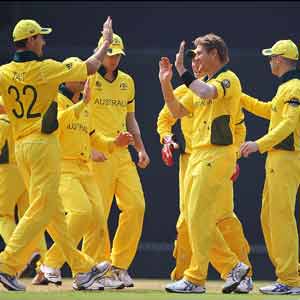 Defending champions Australia have already qualified for the World Cup quarterfinals but are eyeing a thumping win over Canada on Wednesday as the race to top the group heats up.

All four qualifiers from Group A are already decided with New Zealand, Pakistan, Sri Lanka and Australia safely through, but final positions are crucial because they determine opponents in the last eight.

A win over minnows Canada, who have endured a miserable campaign, would take Australia to the top of the group on nine points and extend an unbeaten run that now stretches all the way back to 1999 - 33 matches in all.

A big win over Canada, which would boost run-rate, is crucial as Ponting's men round off their Group A campaign against Pakistan in Colombo on Saturday in what is expected to be their first major test of their Cup credentials.

Ponting insisted the defending champions, bidding for a fourth straight World Cup and fifth in all, would not ease up now that qualification was assured.

"We want to win every game that we play and we want to continue to improve on each performance as we go through this tournament," he said.

"One of our great keys to success in previous World Cups is we've been able to build our way up through tournaments and when the semi-finals and final have come around is generally when we've been playing our best cricket."

Ponting added the Canada match in Bangalore represented a last chance for Australia to fine-tune their plans.

"From now on, I don't think we can afford to be experimenting too much, we have to get down to playing a brand of cricket that's going to hold up in big games," the star batsman explained.

Canada captain Ashish Bagai said the way his side performs against Australia could force a change in plans to cut the number of teams at future World Cups.

The International Cricket Council aims to have only 10 nations competing at the 2015 World Cup, compared to the current 14.

"It's for us to put on a good show to give reasons to the ICC to rethink their decision," Bagai said.

Meanwhile, South Africa skipper Graeme Smith said he was keen to keep up his side's winning momentum after they became the first side from Group B to book their place in the quarter-finals with a comprehensive win over Ireland.

"I don't think it really matters who you play in the quarterfinals as you've still got to win the game. We needed to win this game to qualify and it was all about winning for us," Smith said.

"We'll go to Bangladesh (for their last group game) with a mindset to win. Obviously, you want to keep up the winning habits and confidence within the group."

Smith said their best is yet to come as there is still room for improvement after posting four wins in five matches, their lone defeat coming against England by a narrow six-run margin.

Comments
Topics mentioned in this article
Cricket Australia Cricket Team World Cup 2011 Canada Cricket Team
Get the latest updates on ICC T20 Worldcup 2022 and CWG 2022 check out the Schedule, Live Score and Medals Tally. Like us on Facebook or follow us on Twitter for more sports updates. You can also download the NDTV Cricket app for Android or iOS.