Australia all-rounder Steve Smith on Wednesday hailed history-maker Lasith Malinga as "brilliant" as the defending champions drew up plans to counter the Sri Lankan slinger at the World Cup. 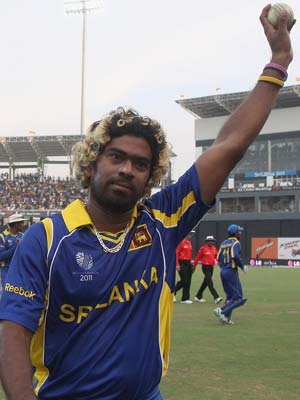 Australia all-rounder Steve Smith on Wednesday hailed history-maker Lasith Malinga as "brilliant" as the defending champions drew up plans to counter the Sri Lankan slinger at the World Cup.

Malinga's trademark collection of yorkers and toe-crushers helped him to a career-best 6-38, including a second World Cup hat-trick, as the home side routed Kenya by nine wickets on Tuesday.

On Saturday, it'll be Australia's turn to face Malinga, who is now fully recovered from the back strain which kept him out of the first two matches at the tournament.

"Malinga was brilliant," said Smith. "The pitch (at R. Premadasa Stadium) varied a bit and helped swing the ball. Sri Lanka are going to be a good challenge for us."

Australia, who defeated Sri Lanka in the 2007 final, and are bidding for a fourth successive World Cup, have looked impressive so far, seeing off Zimbabwe by 91 runs and enjoying a seven-wicket win over New Zealand.

"For us, the big challenge is to play against Sri Lanka here. They play really well in these conditions."

Sri Lanka defeated Australia away from home in November and 21-year-old leg-break bowler Smith is hoping to slam the brakes on Kumar Sangakkara's free-scoring batsmen.

"When I come in, I expect Sri Lanka to come hard at me. I just have to make sure I take wickets, keep the runs down and break partnerships," said Smith.

One of the most promising Australian spinners since the Shane Warne era, Smith said playing in the World Cup on sub-continent pitches was a good learning experience.

"After Warnie (Shane Warne), there haven't been any leggies (leg-spinners). It's a big challenge for me and a big learning curve. Everyday I'm learning something at the nets.

"I like to be a genuine all-rounder, not just a spinner. These playing conditions have been good for me," he said, when asked how he plans to improve his one-day batting average of 25 and bowling average of 28.

"Batting at seven is tough. When you come in at the end you have to hit boundaries and push the scores up. It doesn't do too much to change the average. But I'm trying to be good at bat and ball."

The Sydney-born Smith has played 17 ODIs and has taken 18 wickets.

Comments
Topics mentioned in this article
World Cup 2011 Australia Cricket Team Cricket
Get the latest updates on ICC T20 Worldcup 2022 and CWG 2022 check out the Schedule, Live Score and Medals Tally. Like us on Facebook or follow us on Twitter for more sports updates. You can also download the NDTV Cricket app for Android or iOS.