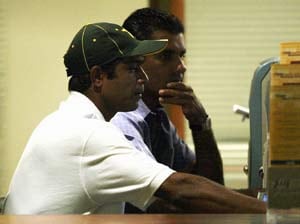 India, winners of the World Cup in 1983, meet the 1992 champions Pakistan in the semi-final on March 30, a match which has already left millions of fans across the border in a frenzy.

Latif said India on their home ground will be favourites.

"India in India are favourites, there is no doubt," Latif told AFP.

"But as a unit the Pakistan team has been very composed in this World Cup, so the team which attacks more will win."

Pakistan topped their group with five victories and one defeat, while India lost to South Africa and tied their match against England besides winning the four other matches.

India ended Australia's 12-year domination when they beat the defending champions by five wickets in the quarter-finals on Thursday.

Pakistan overwhelmed the West Indies by 10 wickets in the last eight stage on Wednesday.

Latif, a member of Pakistan team who lost to India in the 1996 World Cup quarter-finals, said losing to their rivals is always painful.

"I was part of that game and I still feel the pain," said Latif of Pakistan's 39-run defeat at Bangalore.

"People have not forgotten that match even after 15 years. Every player wants to be remembered in history and an Indo-Pak encounter is an ideal opportunity to reach stardom in a flash."

"No one can understand the agony better than Waqar, and he is lucky to have another chance to erase the bitter memories", said Latif of the former paceman who went for 67 in his 10 overs in that game.

Latif urged the managmenet to include Shoaib Akhtar in the semi-final line-up.

"Akthar has always been a team man, and his aggression and zeal, while playing against our arch-rivals, could be beneficial, and I feel the management is aware of this," said Latif of the paceman who will retire after the World Cup.

Latif, a former wicket-keeper batsman, said the passion of an India-Pakistan match spurs on the players.

"With the unity amongst the players this team stands a good chance against India. The Akmal brothers, Shahid Afridi, Abdul Razzaq and Younis Khan will the players to watch."