AB de Villiers and Hashim Amla smashed centuries against the hapless Netherlands bowlers on Thursday to set up a thumping 231-run win for South Africa. 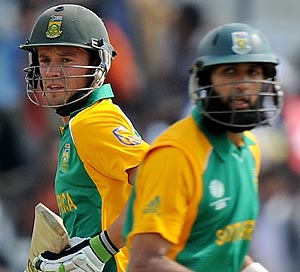 A day after Ireland's heroics in Bangalore gave the Associates a major fillip, normal service resumed in Mohali where AB de Villiers and Hashim Amla reeled off contrasting hundreds to set up a hammering of Netherlands. Peter Borren elected to field under overcast skies, but things unraveled at an alarming rate after a disciplined show in the first quarter of the match. Amla overcame a sluggish start and focused on accumulation, while de Villiers shredded the attack in a blaze of big hits that was reminiscent of Herschelle Gibbs' assault in the last World Cup encounter between these two teams. South Africa's bowlers then backed up the batting heroics with a near-perfect display to set up the fourth-biggest win in World Cup history.

Chasing 352, Netherlands' best chance of getting anywhere depended on the top order's ability to see off Dale Steyn and Morne Morkel. The openers played out six overs from South Africa's fastest bowlers, but Jacques Kallis ruined their efforts by snaring two quick wickets after coming in first-change. With the run-rate under control, Graeme Smith deployed his spinners on the lower order, and Netherlands sank without a trace, losing their last seven wickets for 39 runs against Imran Tahir and Robin Peterson.

The margin of victory completely eclipsed Netherlands' spirited efforts with the new ball. Their steady army of seamers stuck to tight lengths, and their accuracy left Smith prodding uncertainly from the outset, unsure of his footwork and indecisive in his outlook. After 31 balls of struggle, Smith had seen enough, and lost his leg stump while trying to shovel Bernard Loots across the line. Ryan ten Doeschate then won the first round in the battle of the prolific allrounders, strangling Kallis into glancing one down the leg side through to the wicketkeeper Wesley Barresi. At 58 for 2 in the 16th over, South Africa were in some strife. Thankfully for them, their two best batsmen in recent times were on hand to revive the innings. Even their most optimistic fans, though, would not have envisaged the emphatic manner in which the tide was turned.

* de Villiers' strike rate of 136.73 is the highest among South African batsmen who have scored centuries in World Cup matches.

* Hashim Amla reached his first century in World Cups off 121 balls. Overall, he has scored over 2200 runs at an average of 60.07 with eight centuries and 12 fifties.

* From a decent position of 81 for 2, Netherlands lost their last eight wickets for just 39 runs to be bowled out for 120.

* With his third player of the match award in World Cups, de Villiers is joint second with Jacques Kallis on the list of South African players with most match awards in World Cups. Lance Klusener heads the list with five awards.

Restless to put the failure against West Indies behind him, Amla tried to kick off his World Cup career by disregarding the lengths, and punching on the up. He nearly paid the price in Berend Westdijk's third over, when his drive fell just short of the man at short cover. In Mudassar Bukhari's next, he mishit another forcing shot through the off side, getting an inside edge that was pouched by Barresi on the bounce. Amla tightened his approach following the two reprieves, resorting to deflections behind square, and compact drives down the ground. His first eight balls yielded three fours, but he got only one more - a fortuitous inside edge to fine leg off ten Doeschate - en route to a vital half-century.

As he had done against West Indies, de Villiers checked in with a surge of immaculate boundaries, flicking and cutting ten Doeschate for fours in the 18th over. They were shots of intent that changed the complexion of the game, ending a period of nearly ten overs in which South Africa's only boundary was Amla's edge to fine leg. de Villiers then went on to expose Netherlands' limitations, leaving the accumulation to Amla and throwing punches in all directions. He looted boundaries in all but two of the overs between 27 and 35, pinging boundaries in a comprehensive arc from third man to midwicket, with shots ranging from the reverse sweep to the slapped flick. While his improvisation was top class, the hallmark of his innings remained the trademark crunched cover-drives whenever the bowlers over-pitched.

Netherlands enjoyed a boundary-drought between overs 36 and 41, but it was clearly a case of the batsmen calibrating their guns for a final assault. Amla strolled to one of his quieter hundreds in the 40th over, and South Africa took the batting Powerplay soon after. de Villiers began the carnage by lapping Pieter Seelar for the first six of the innings, before reaching his century off 88 balls. His next ten deliveries brought him 34 runs, as he smashed Loots for three successive sixes and then ten Doeschate for a hat-trick of fours. Netherlands managed to dismiss both batsmen in quick succession, but it was scarce solace as the Powerplay went for 69. The fields fell back for the last four overs, but that did not seem to affect Duminy, who kept getting under length deliveries to swing four gleeful sixes. Netherlands must have known they were out of the game once South Africa finished with 351. Unfortunately, they did not have Kevin O'Brien in their ranks.

Comments
Topics mentioned in this article
France Canada Belarus Netherlands Mexico Portugal South Africa Cricket Team Peter Borren Cricket World Cup 2011
Get the latest updates on ICC T20 Worldcup 2022 and CWG 2022 check out the Schedule, Live Score and Medals Tally. Like us on Facebook or follow us on Twitter for more sports updates. You can also download the NDTV Cricket app for Android or iOS.