Pakistan captain Shahid Afridi on Monday patted his team-mates for their all-round show in the seven-wicket win over Zimbabwe to qualify for the quarterfinals of the cricket World Cup. 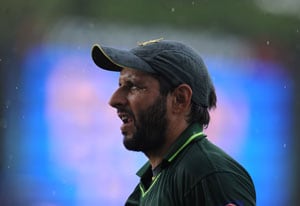 Pakistan captain Shahid Afridi on Monday patted his team-mates for their all-round show in the seven-wicket win over Zimbabwe to qualify for the quarterfinals of the cricket World Cup here.

"I think we started very well, (Umar) Gul and (Abdul) Razzaq started very well, and then the spinners. I think the way (opening batsman) Mohammad Hafeez played, good to see him back. (Asad) Shafiq played an amazing knock," Afridi said after his side beat Zimbabwe by seven wickets.

Afridi, known for his big hitting, said he tried to finish the game quickly but could not as he was out for just three runs.

"I tried to finish the game early but I'm sure I will perform with the bat as well," said Afridi who is the leading wicket taker so far in the tournament with 16 scalps.

Asked if Gul-Razaaq bowling in tandem would be persisted in Pakistan's last league fixture against Australia on March 19 in Colombo, Afridi said, "We will see the conditions and we may change also. We can have seamer and spinner combination also."

Asked about the big match coming up against Australia, the Pakistan captain said, "It would be another day and a new game. We know how important that match is and we hope to give our best."

Man-of-the-Match Gul, who took three for 36, said he was happy to have got back his rhythm.

"I'm back in my form and rhythm. I tried to bowl wicket to wicket. I looked at the pitch before the match, I was happy to bowl first. We are looking forward to the game against Australia. We have done our homework, we will do our best," he said.

Zimbabwe captain Elton Chigumbura said his side lost momentum after the rain break and they fell short of runs. "Again we lost too many wickets first up, from there it was tough to come back into the game. Rain also made it hard for us to get some momentum. We fell short of runs," he said.

"After this, we are going to work on our batting, especially in the first 10 overs. I thought Craig Ervine played pretty well. I'm happy with the bowling also, the spinners with old ball bowled good lines."

Comments
Topics mentioned in this article
Cricket Shahid Afridi New Zealand Cricket Team Pakistan Cricket Team Australia Cricket Team Zimbabwe Cricket Team World Cup 2011
Get the latest updates on ICC T20 Worldcup 2022 and CWG 2022 check out the Schedule, Live Score and Medals Tally. Like us on Facebook or follow us on Twitter for more sports updates. You can also download the NDTV Cricket app for Android or iOS.