Following are the statistical highlights of the Group B match between India and Ireland on Sunday. 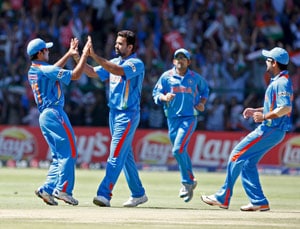 Following are the statistical highlights of the Group B match between India and Ireland on Sunday:

# Yuvraj became the first bowler to take five wickets in an innings against Ireland at the World Cup, surpassing the 4 for 19 by Muttiah Muralitharan for Sri Lanka at St. George's on April 18, 2007.

# Yuvraj's performance is the second best by any bowler against Ireland in ODIs - the best being five for 14 by James Hopes for Australia at Dublin on June 17, 2010.

# Paul Stirling has registered his first duck in ODIs.

# The calendar year 2010 has been Stirling's best in ODIs, aggregating 771 in 17 matches at an average of 45.35, including one hundred and five fifties.

# The 100th six of the 2011 edition of the World Cup has been recorded by William Porterfield off Piyush Chawla - his first over in Ireland's innings.

# William Porterfield and Niall O'Brien were associated in a 113-run stand - Ireland's highest for the third wicket in ODIs, surpassing the 89 between Andre Botha and Niall O'Brien against Netherlands at Dublin on July 28, 2008.

# The highest ever stand for Ireland against India in ODIs is their second highest for any wicket at the world cup, behind the 162 for the sixth wicket between Kevin O'Brien and Alex Cusack against England at Bangalore on March 2, 2011.Â  These two partnerships are Ireland's only century stands at the world cup.

# Trent Johnston (2/16) has produced his best bowling figures in the world cup.

# Willilam Porterfield's fifth half-century in ODIs is his first against India.

# Ireland's highest ever total (207) in ODIs against India is their fifth best at the world cup.Â  Their previous highest against India was 193 at Belfast on June 23,2007.

# Yuvraj Singh's brilliant bowling figures of 5 for 31 are his best ever in ODIs - his first five-wicket instance.Â  He is the first left-arm spinner to capture five wickets in the world cup, obliterating his own figures of four for six against Namibia at Pietermaritzburg on February 23, 2003

# Yuvraj's aforesaid figures are the fifth best by a left-armer in the world cup - the top four performances are six for 14 by Gary Gilmour for Australia against England at Leeds on June 18, 1975; 6 for 23 by Ashish Nehra for India against England at Durban on February 26, 2003, 6 for 25 by Chaminda Vaas for Sri Lanka against Bangladesh at Pietermaritzburg on February 14, 2003 and 5 for 28 by Wasim Akram for Pakistan against Namibia at Kimberley on February 16, 2003.

# Yuvraj, with his fifth fifty at the world cup, has become the first all-rounder to capture five wickets apart from registering a hundred in the same game.

# Yuvraj's 47th fifty in ODIs is his 35th for winning cause.

# India's aforesaid victory is the 50th under Gary Kirsten.

Comments
Topics mentioned in this article
India Cricket Team World Cup 2011 Ireland Cricket Team Yuvraj Singh Gary Kirsten Anil Kumble Cricket
Get the latest updates on ICC T20 Worldcup 2022 and CWG 2022 check out the Schedule, Live Score and Medals Tally. Like us on Facebook or follow us on Twitter for more sports updates. You can also download the NDTV Cricket app for Android or iOS.