The Australian supremacy continued as they beat Sri Lanka to win a hat trick of World Cup wins. 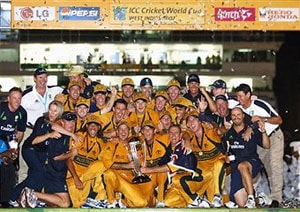 The World Cup travelled across the globe this time to be held in the Caribbean Islands for the first time with 16 countries playing the event. Fans from many nations decided not to undertake the long journey and thus many matches were played in the backdrop of empty stands.

Four groups with four teams each were formed and the top two teams made it to the Super Eight stage.

Australia beat South Africa in Group A but both teams made it through to the next round. Bangladesh sprang a surprise in Group B by beating Indian and qualified along with Sri Lanka. Group C saw New Zealand and England go through while Ireland shocked Pakistan in Group D to enter the next stage with the West Indies.

The long Super Eights format resulted in the top four teams qualifying for the semis. Australia continued their unbeaten run with Glenn McGrath and Matthew Hayden in splendid form with the ball and bat respectively.

Sri Lanka were impressive and followed the leaders with New Zealand in toe. South Africa stumbled but managed to qualify for the semis.

A brilliant unbeaten 115 by Mahela Jayawardene helped the Lankans to a total of 289/5 against New Zealand in the first semi-final who then could not bat to save themselves and lost out.

Australia showed the Proteas who's the boss again as Shaun Tait's 4-wicket burst left the South Africans all out for 149. Australian batsmen strolled to victory.

The final was again played between the two best sides in the tournament. Like against India in the last final, Australia tried to bat the opposition out of the game. A blitskrieg of an innings by Adam Gilchrist, who scored 149 runs off 104 balls helped Australia post 281/4 in a rain reduced 38 overs.

Sri Lanka tried hard but eventually finished 53 runs short of the target as Australia completed a hat-trick of world titles.

Comments
Topics mentioned in this article
World Cup 2011 Cricket Ricky Ponting Matthew Hayden
Get the latest Cricket news, check out the India cricket schedule, Cricket live score . Like us on Facebook or follow us on Twitter for more sports updates. You can also download the NDTV Cricket app for Android or iOS.