Cricket's showpiece tournament returned to the sub-continent again with Sri Lanka as the new co-hosts alongside India and Pakistan. 12 teams participated in this competition with UAE, Holland and Kenya being selected from ICC's qualifying tournament. The teams were divided in two groups of six each. 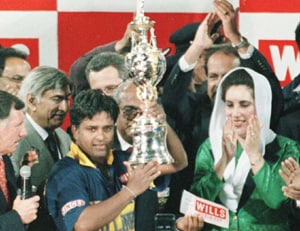 Cricket's showpiece tournament returned to the sub-continent again with Sri Lanka as the new co-hosts alongside India and Pakistan. 12 teams participated in this competition with UAE, Holland and Kenya being selected from ICC's qualifying tournament. The teams were divided in two groups of six each.

Group A was rocked by controversy as Australia and West Indies forfeited their matches against Sri Lanka as they would not travel to the country due to security concerns. Sri Lanka managed to beat India and minnows Kenya and Zimbabwe to top the group.

Australia were second after victories over India, Kenya and Zimbabwe. India finished third after getting past the two minnows and the West Indies.

The Carribean team touched a new low after they succumbed to a shock defeat to first-timers Kenya, but bounced back by defeating Australia to make the quarters.

In Group B, Hansie Cronje led South Africa stamped their authority on the tournament with five scintillating victories. Hosts Pakistan came in second by beating the rest of the competitors while New Zealand and a miserable England were the other teams to qualify for the knock-out stage.

In the first quarter-final, Sanath Jayasuriya's blazing willow ended England's sorry tale as he scored 82 runs off 44 balls to take the Lankans to the semis for the first time.

The next match was the one many had waited to witness. Arch-rivals India and Pakistan played at Bangalore for a spot in the semis. Batting first India managed a huge total of 287/8 after a studied 93 by Navjot Sidhu and a whirlwind 45 by Ajay Jadeja. Pakistan were given a great start by openers Saeed Anwar and Aamer Sohail, but once they perished, Pakistan ran out of steam.

No one gave West Indies any chance against the South Africans but Brian Lara came to the party with a 94-ball 111 to take his side to a respectable score of 264/8. The Proteas fought hard but a 4-wicket burst from off-spinner Roger Harper put paid to their hopes of progressing further.

A surprise century by Chris Harris (130) gave New Zealand a huge opportunity to upstage the Aussies but Mark Waugh's 110 and some lusty hitting by Stuart Law and Steve Waugh gave Australia a 6-wicket win.

India had lost earlier to Sri Lanka, but were firm favourites when the two teams clashed at a packed Eden Gardens in Calcutta in the first semi-final. Put in to bat by the Indians, Sri Lanka lost both their hard-hitting openers to Javagal Srinath in the first over itself. But that allowed the great craftsman, Aravinda de Silva a chance to finally come of age on the big stage as he kept the runs flowing at the other end. His 66 and useful contribution in the middle-order took the Lankans to a total of 251/8.

India lost Sidhu early but their talisman Sachin Tendulkar was at his majestic best. But the match was turned on its head once Sachin was stumped off Jayasuriya for 65. India lost 6 wickets for the addition of just 22 more runs and the capacity crowd lost it's cool. Play was disrupted and after repeated efforts to start the match failed, referee Clive Lloyd decided to award the match to the Lankans.

In the other semi-final, Windies pacers Ambrose, Bishop and Walsh devastated Australia as the Aussies were down to 15/4. But a rearguard 138-run stand between Stuart Law (72) and Michael Bevan (69) allowed them to post 207 runs on the board.

Windies opener Shivnaraine Chanderpaul (80) was in excellent touch and along with Lara (45), marched comfortably towards the target. But once he departed with the score on 165/3, Australia managed to create some panic. Skipper Richie Richardson waged a lonely battle as wickets kept falling at the other end. He was left stranded on an unbeaten 49 as the West Indies were all out for 202 just 6 away from a victory with 3 balls to spare.

In the final at Lahore's Gaddafi Stadium, Sri Lanka won the toss and put Australia in. Skipper Mark Taylor's polished 74 and a handy 45 by Ricky Ponting put the Australians in good shape but 3 wickets from Aravinda de Silva halted the Aussie progress at 241/7.

Aravinda de Silva then turned on the style by smashing an unbeaten 107 and along with skipper Arjuna Ranatunga (47 n.o.), led the rank outsiders to their Cup of glory.

Comments
Topics mentioned in this article
World Cup 2011 Aravinda De Silva Football Cricket Arjuna Ranatunga
Get the latest Cricket news, check out the India cricket schedule, Cricket live score . Like us on Facebook or follow us on Twitter for more sports updates. You can also download the NDTV Cricket app for Android or iOS.