The growing influence of sub-continental teams meant that the World Cup moved out of England for the first time and was co-hosted by India and Pakistan. 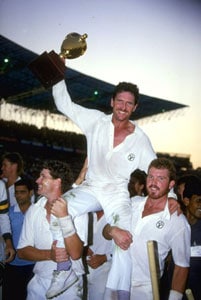 The growing influence of sub-continental teams meant that the World Cup moved out of England for the first time and was co-hosted by India and Pakistan. The format remained the same with the 8 teams divided in two groups of four each. This was the first time ever that the 50-over format was used in the World Cup.

Defending champions India lost to Australia by just one run in their first outing but went on to win the rest of their matches to top Group A. Australia too won 5 matches and qualified for the semi-finals in second place.

In Group B, co-hosts Pakistan sealed their third consecutive semi-final spot by winning their first five matches and then lost an inconsequential last match to West Indies.

England scrambled into yet another semi-final, which meant that West Indies missed out on a last 4 berth for the first time ever.

With Pakistan facing Australia at Lahore and India facing England in Mumbai in the two semi-finals, the expectations soared as everyone wanted to see an Indo-Pak final.

But this is where the script started to go wrong for the home crowds. David Boon's 65 laid the platform for Australia to post a competitive 267/6. Craig McDermott then bowled a fine spell to take 5/44 in 10 overs to end Pakistan's World Cup dreams.

In Bombay, Graham Gooch led from the front with a brilliant 115, while skipper Mike Gatting scored a 56 to help England to a total of 254/6. Although India made a bad start, Azharuddin's well paced 64 meant that the hosts needed 50 odd runs from the last 10 overs. This is when the English bowlers tightened the screws and India collapsed to 219 all out in 45.3 overs.

The final was played at the Eden Gardens in Kolkata and having decided to bat first after winning the toss, Aussie opener David Boon got down to his task to leading the way for his team and scored a fluent 75. But a final score of 253/5 was by no means out of England's reach.

Bill Athey (58) and Mike Gatting (41) put England on track for a win until Gatting decided to reverse sweep his counterpart Allan Border and ended up giving his wicket. Thereafter it was a downslide for the English. Allan Lamb (45) fought hard but with 17 needed off the last over, Australia were sensing victory. And McDermott finished off in style to hand Australia a 7-run win and Allan Border lifted the trophy aloft for Australia.

(This story has not been edited by NDTV staff and is auto-generated from a syndicated feed.)
Comments
Topics mentioned in this article
Cricket Australia Cricket Team India Cricket Team New Zealand Cricket Team Pakistan Cricket Team World Cup 2011
Get the latest Cricket news, check out the India cricket schedule, Cricket live score . Like us on Facebook or follow us on Twitter for more sports updates. You can also download the NDTV Cricket app for Android or iOS.