With the one-day format just 18 international matches old at the time the inaugural cricket World Cup was hosted by England in 1975, most saw it as a bold but innovative step. Little did they know that this quadrennial tournament was to become the biggest honour in the history of the game. 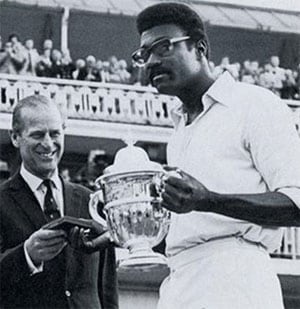 With the one-day format just 18 international matches old at the time the inaugural cricket World Cup was hosted by England in 1975, most saw it as a bold but innovative step. Little did they know that this quadrennial tournament was to become the biggest honour in the history of the game.

Contested by eight teams with East Africa and Sri Lanka being the non-Test playing sides in the competition, hosts England were easily the best team on show in Group A winning all their matches.

New Zealand, India and East Africa were the other teams in the group.

England's Dennis Amiss scored the first century of the tournament against India, notching up 137 runs.

India's Sunil Gavaskar must be playing for a draw in the same match as he carried his bat through the innings in India's response to finish unbeaten on 36 in one of the most bizarre ODI innings ever. With East Africa losing to all the other teams, New Zealand joined the hosts in the semis after beating India.

In Group B, favourites West Indies won all their matches but not before having a narrow escape against the spirited Pakistanis. Australia beat Pakistan in a potential knock-out match to qualify for the semis.

In the first semi-final played at a seaming Headingley pitch, Australian pacer Gary Gilmour devastated the English batting line-up as the hosts caved in for 93 all out. Gilmour finished with figures of 6/14.

With the Aussies tottering at 39/6, Gilmour completed a great all-round performance by taking his team to the final with an unbeaten run-a-ball 28.

In the second semi-final at The Oval, New Zealand were put to bat by the Windies and after a solid start to their innings, the Kiwis collapsed to a final score of 158.

Alvin Kallicharan (72) and Gordon Greenidge (55) took West Indies to their target with relative ease.
In the final at Lord's, West Indies' Clive Lloyd played a captain's knock as he plundered the Australian bowling to score 102 runs from 85 balls which helped his team finish at a score of 291/8 in 60 overs.

Australia fought hard but their cause was not helped by 5 run-outs, three of which were affected by Viv Richards. They eventually fell short by 17 runs and West Indies were crowned champions.

Comments
Topics mentioned in this article
Isaac Vivian Alexander Richards Cricket Sunil Manohar Gavaskar World Cup 2011 Clive Hubert Lloyd
Get the latest Cricket news, check out the India cricket schedule, Cricket live score . Like us on Facebook or follow us on Twitter for more sports updates. You can also download the NDTV Cricket app for Android or iOS.