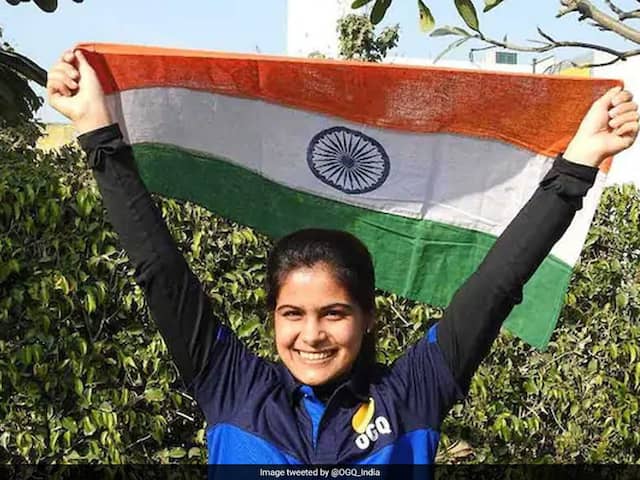 Manu Bhaker finished third in qualification with a total of 582 points.© Twitter

Young Manu Bhaker secured India its seventh Olympic quota in shooting with a fourth-place finish in the women's 10m air pistol event of the ISSF World Cup in Munich on Wednesday, putting behind the disappointment of pistol malfunction in her earlier event. While a score of 201.0 in the final got India a quota for the 2020 Tokyo Games, the 17-year-old Bhaker missed out on a medal by the narrowest of margins, trailing reigning Olympic and world champion Anna Korakaki of Greece by a mere 0.1 point at that stage.

Winner of multiple medals at top global events, Bhaker finished third in qualification with a total of 582 points (28 x inner 10s), shooting a solid 98 in her last two rounds.

On Monday, Bhaker suffered a heartbreak as she missed out on the podium after a weapon malfunction saw her slip to fifth spot after leading the field.

Korakaki and the bronze winning Korean Kim Minjung were not eligible from the start, having exhausted either their individual or country quotas in earlier competitions.

India have now picked up two Olympic quotas from the ongoing World Cup as well as three gold medals to lead the medal tally with one more day to go.

Sunidhi Chauhan gave a good account of herself in the women's 50m rifle 3 positions event, losing out on a maiden ISSF World Cup finals berth on account of lesser inner 10s.

Needing to be among the top eight to qualify for the final, Sunidhi shot a creditable 1175 to tie on points with the 6th, 7th and 8th placed shooters, but Italian former world champion Petra Zublasing edged her out for the last spot with 57-inner 10 counts to Sunidhi's 51.

It could not have been closer for the youngster from Bhopal, who is in her debut senior year. Compatriots N Gaayathri and Kajal Saini shot scores of 1162 and 1140 to finish 52nd and 70th. Yulia Zykova of Russia won the gold in the event.

In men's 25m rapid fire pistol, Arpit Goel shot 577 to be the best-placed Indian at 21st in the qualifying. Adarsh Singh was 41st while Anish Bhanwala finished 47th with a score of 567.