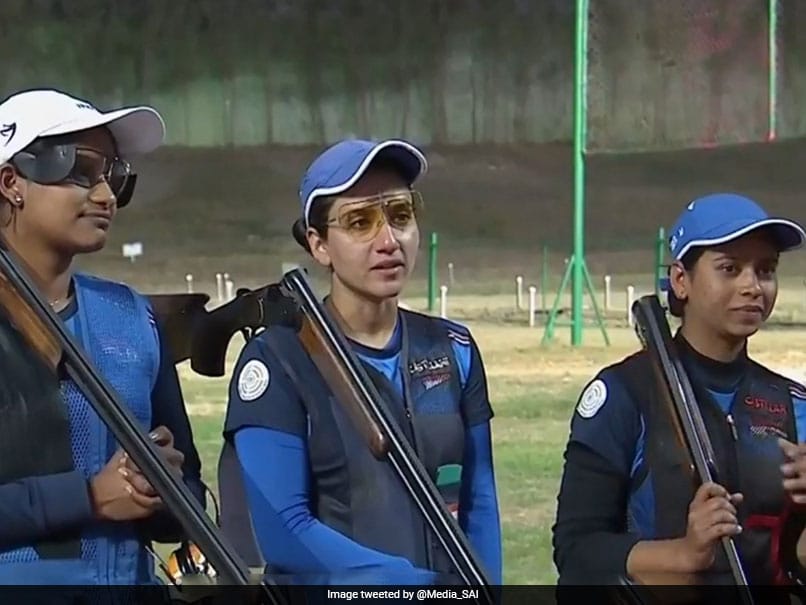 Indian women's team had to contend with silver at the ISSF World Cup.© SAI Media/Twitter

Indian women's trap team trio Kirti Gupta, Manisha Keer and Rajeshwari Kumari lost 4-6 to Russia to settle for a silver medal on the concluding day of the ISSF World Cup in Cairo. The Indian team engineered a fantastic comeback in the gold medal match on Thursday, coming back from 0-4 down to tie the final at 4-4. However, it could not hold on in the last series of 15-shot per team and had to be content with second best. The trio's effort ensured that the Indian squad finished the World Cup with two medals, with the men's skeet team bagging a bronze earlier in the tournament.

Kirti, Manisha and Rajeshwari shot a combined score of 444 to make it to the gold medal match along with Russia, who topped the qualifying round with a total of 463.

There were a total of seven 25-shot rounds, five of which had been shot in the previous days.

On Thursday, all three Indian women shot scores of 20 or more in the final two qualifying rounds, with Manisha top-scoring for them with 158 out of 175 shots.

The men's trap team, however, could not make it to the medal rounds after shooting a combined score of 469 to finish sixth out of 11 teams in the fray.

Russia and Croatia made it to the gold medal match while hosts Egypt and Slovakia were to fight it out for the bronze.