India topped the chart for the second consecutive ISSF World Cup, third time in two years, by bagging three gold and a silver at the Beijing edition. 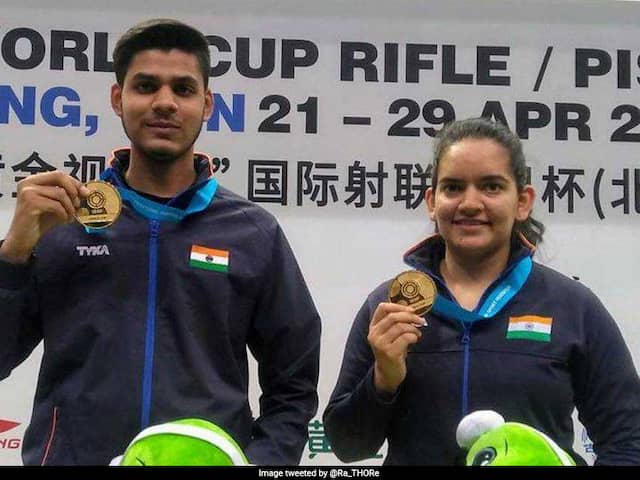 India drew blank on the final day but still topped the chart for the second consecutive ISSF World Cup, third time in two years, by bagging three gold and a silver at the Beijing edition of the Rifle/Pistol event in Beijing. India topped the medals tally ahead of hosts China (2 gold, 2 silver, 1 bronze), who won five medals in total. In the last edition in New Delhi, India had jointly topped the standings with Hungary. For India, while Anjum Moudgil and young Divyansh Singh Panwar started the medal hunt with a gold in the 10m Air Rifle Mixed Team competition, the teenaged pair of Manu Bhaker and Saurabh Chaudhary backed them up with another yellow metal in the 10m Air Pistol Mixed Team Pistol event.

In the first final on Sunday, the 46-year old Maria, champion in the 25m Pistol at the Sydney 2000 and Beijing 2004 Olympics, shot 36 in the final to beat a couple of young rising stars -- world number one Anna Korakaki of Greece and Veronika Major of Hungary, who was fresh from a double gold in the New Delhi World Cup. The Hungarian settled for silver while Anna was pushed to the bronze medal position. Maria along with Monika Karsch of Germany, who finished fourth, bagged the two Tokyo 2020 quota places up for grabs in the event.

Indian interest in the event was limited to the qualifying stage of the competition where Manu Bhaker's finals hopes were dashed when she shot 586 in qualifying to finish 17th. Asian Games champion Rahi Sarnobat managed 579 for a 26th place finish while Chinki Yadav, the third Indian in the competition, shot 570 to end in 56th position.

In the women's 3P, Beijing Olympics bronze medallist and winner of 17 World Cup medals including eight golds, Snjezana Pejcic of Croatia triumphed with a final round score of 464. Bae Sang Hee of Korea won silver with 459.5 while Jeanette Hegg Duestad of Norway won bronze with 447.1. The Korean and the Norweigian also walked away with the two quota places.

Among the three Indians in the fray, N Gaayathri finished 19th with a score of 1169 in qualification while Sunidhi Chauhan shot 1160 to end in 42nd. Kajal Saini was placed 60th with a qualification round score of 1142.