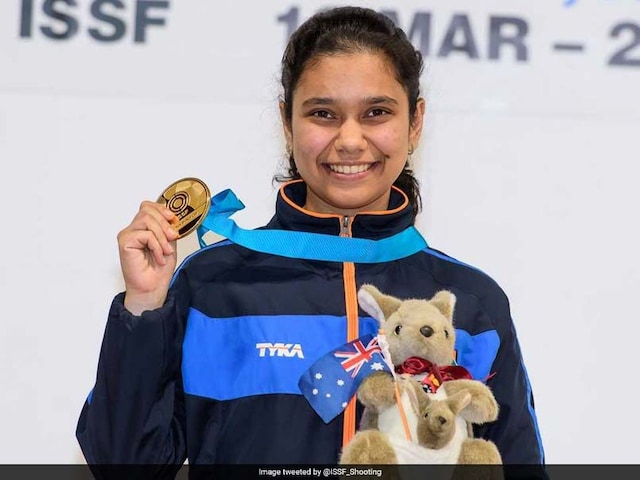 Muskan Bhanwala, 15-year-old, matched her brother Anish's feat and erased memories of missing out on a Junior World Championship medal last year by winning the Women's 25m Pistol event at the International Shooting Sport Federation (ISSF) Junior World Cup Rifle/Pistol/Shotgun, which concluded at the Sydney International Shooting Centre in Australia on Wednesday. She beat a group of four Chinese shooters and compatriots Manu Bhaker, who was gunning for her seventh ISSF Gold of the month, and Arunima Gaur besides Bronze winning Thai Kanyakom Hirunphoem to emerge victorious with 35 hits out of 50 in the final.

China's Sihang Qin, who was a finalist in the event at the senior world cup held earlier this month in Guadalajara, Mexico, won Silver, finishing one hit behind Muskan with 34.

Earlier, Muskan and Manu, who had to be satisfied with a fourth place finish in the individual event, combined with Devanshi Rana to ensure the Team Gold in the event was also bagged by India. They totaled 1715 after the qualification rounds to leave behind India's second team comprising of Arunima Gaur, Mahima Turhi Agrawal and Tanu Rawal in Silver medal position with a combined score of 1705.

Team Thailand won the Bronze in the event. This was Manu's sixth ISSF Gold medal of the month as she followed up her two Golds at the senior World Cup with four in Sydney.

In the men's skeet, Anant Jeet Singh Naruka, shot a superb 121 in qualifying to enter the final round but ended fifth eventually with 24 hits in the first 30 shots. China's Xuyang Dou won Gold in the event with a junior world record score of 58 out of 60 hits. Italians Matteo Chiti and Niccolo Sodi won Silver and Bronze with scores of 52 and 42 (ruled out after 50 shots) respectively. Anantjeet did however come away with a Silver medal in team section along with Ayush Rudraraju and Gurnihal Singh Garcha for a combined score of 348, which was behind Italy's 357.

In the women's 25m Pistol, Arunima Gaur was the best placed Indian in qualifying with a score of 575, leading a group of three Indians, Manu with 574 and Muskan with 573, into the eight-woman final. Gunning for her seventh ISSF Gold medal of the month, Manu had the worst possible start drawing a blank in the first series of five shots in the final. In the end, she did well to finish fourth ahead of Arunima who settled for seventh place.

Muskan,meanwhile, was shooting consistently barring the fifth series of the 10 five-shot series final and went into the last series two ahead of second placed Chinese Qin. In the last series, Muskan got four out of five and even though the Chinese shooter hit a perfect five, it was not enough to stop Muskan from securing Gold.