Fabio Quartararo, 20, impressed in his debut MotoGP campaign in 2019 with Yamaha's satellite team and will make the step up to the factory line-up for the 2021 and 2022 seasons. 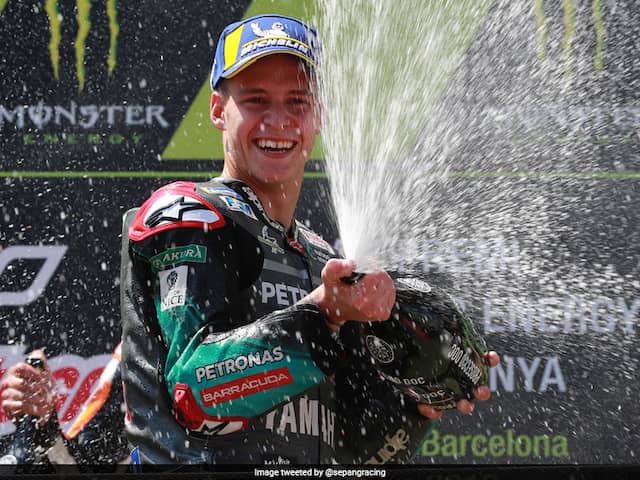 Fabio Quartararo will replace Valentino Rossi at Yamaha from the 2021 season.© Twitter

French rider Fabio Quartararo will replace seven-time MotoGP champion Valentino Rossi at Yamaha from the 2021 season as the veteran Italian ponders his future in the sport, the team announced Wednesday. Quartararo, 20, impressed in his debut MotoGP campaign in 2019 with Yamaha's satellite team and will make the step up to the factory line-up for the 2021 and 2022 seasons.

Rossi, who turns 41 next month, will make a decision on his future at some point this year after determining whether he feels he can still compete at the top level.

"Following discussions together, Yamaha and Rossi have mutually agreed that the personal decision whether the Italian will remain an active rider in the MotoGP World Championship in 2021 will be taken mid-2020," the team said in a statement.

Rossi will use the first seven or eight races of the 2020 season to assess whether he will stay on for another year.

If the Italian chooses to prolong his career, Yamaha said it would make a "factory-spec bike and full engineering support" available to him, likely via the satellite team.

"Consistent with what I said during the last season, I confirmed that I didn't want to rush any decision and needed more time," said Rossi.

"It is clear that after the last technical changes and with the arrival of my new crew chief, my first goal is to be competitive this year and to continue my career as a MotoGP rider also in 2021.

"Before doing so, I need to have some answers that only the track and the first few races can give me."

Quartararo earned seven podiums in 19 starts and claimed six pole positions in his first season in the premier class, finishing fifth in the overall standings.

He will partner Maverick Vinales in 2021 and 2022, after Yamaha announced Tuesday the Spaniard had signed a two-year contract extension.

The 2020 season begins in Qatar on March 8 and runs through to mid-November with the finale at Valencia. Pre-season testing starts in Sepang, Malaysia, from February 7-9.