Marc Marquez clinched his 12th MotoGP victory of the season in Sunday's final race in Valencia ahead of Fabio Quartararo. 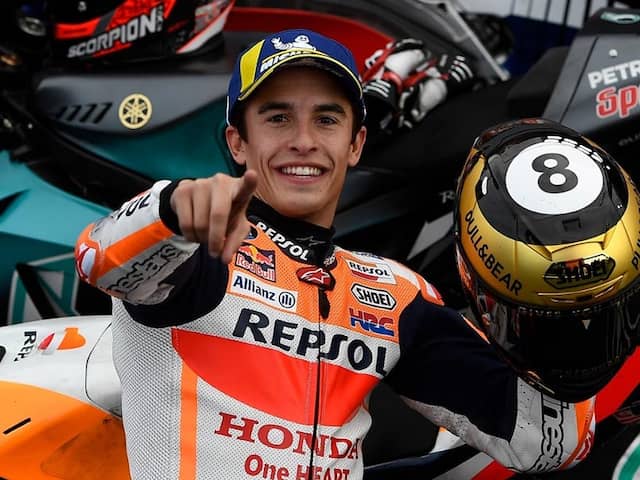 World champion Marc Marquez clinched his 12th MotoGP victory of the season in Sunday's final race in Valencia ahead of French rookie Fabio Quartararo. Marquez, who secured his sixth premier category title last month, finished over a second clear of pole-sitter Quartararo who came second for the fifth time in his debut campaign. The Spaniard made a poor start from second place on the grid but steadily picked off his rivals one by one to win at Valencia for just the second time in his career.

"It's been a difficult weekend because we've tried new things," said Marquez, who took his 56th MotoGP win.

"It's a perfect season which will be difficult to repeat."

The 32-year-old Spaniard announced his decision to retire on Thursday. He could be replaced by Marquez's younger brother and Moto2 champion Alex at Honda next season.

Quartararo again fell just short in his bid to become the first Frenchman to win a MotoGP race since 1999, but the 20-year-old was delighted with his first season among the elite.

"Nobody could have imagined at the start of the season that I would have six pole positions and seven podiums. It's incredible to finish the season in this way," said Quartararo, who ended fifth in the overall standings.

Crutchlow went down before Zarco, cut loose by KTM earlier this season, was sent skidding by 19-year-old Spanish debutant Iker Lecuona who followed the Frenchman to the deck.

Zarco was examined by on-site medics before gingerly limping back to his team stable.

Lecuona was filling in for the KTM Tech team in place of Miguel Oliveira, who was injured in the last race in Australia.

Valentino Rossi, showing no signs of wanting to retire at the age of 40, rounded out his season by coming eighth. The Italian, a seven-time MotoGP champion, finished seventh overall.

Compatriot Andrea Dovizioso, second in the championship behind Marquez for the third year running, took fourth at the Ricardo Tormo circuit.

South Africa's Brad Binder concluded the Moto2 season with his third successive win to finish runner-up. He will also make the step up to the top level with KTM next year.

Valencia native Sergio Garcia, 16, won for the first time in Moto3 as he pipped Italy's Andrea Migno to the line in a race shortened after a series of crashes.