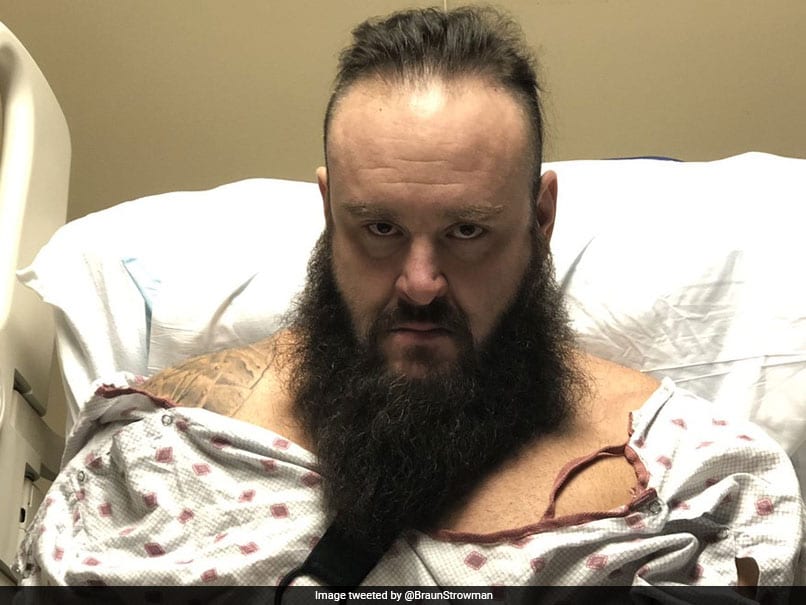 Braun Strowman had to undergo an elbow surgery on Monday to fix a bone spur issue.© Twitter: BraunStrowman

Acting RAW General Manager Baron Corbin, Drew McIntyre and Bobby Lashley brutally assaulted Braun Strowman and smashed The Monster Among Men's right arm with the steel steps during a six-man elimination tag team match last week. Later, WWE.com confirmed that Strowman had sustained serious injuries in the attack. After the extent of the injuries was known, Strowman had to undergo an elbow surgery on Monday to fix a bone spur issue. Strowman, who is currently scheduled to face Corbin in a Tables, Ladders and Chairs Match at WWE TLC on December 16, took to Twitter and issued a warning to his arch nemesis and his allies after his surgery was declared successful. "The countdown to my return and your end starts now. #TickTock", Strowman tweeted.

The countdown to my return and your end starts now. #TickTock pic.twitter.com/FedLhQ3HEz

RAW Commissioner Stephanie McMahon had scheduled a Tables, Ladders and Chairs Match between Strowman and Corbin at the WWE TLC pay-per-view. If Strowman defeats the Acting RAW GM, he will get a Universal Championship opportunity against Brock Lesnar at Royal Rumble, and Corbin will lose all authority. If Corbin wins, then he will become the permanent General Manager of Monday Night RAW.

With Strowman out of the equation for a while, The Lone Wolf dubbed himself the "General Manager-Elect" and declared himself the pre-emptive winner of their high-stakes TLC Match.

The match is still scheduled because Corbin refuses to cancel it, openly anticipating for a forfeit win over The Monster Among Men.

With McIntyre and Lashley pegged as his prospective lieutenants, Corbin made a point of highlighting that he would remember which Superstars stood by his side after he gets the permanent gig.