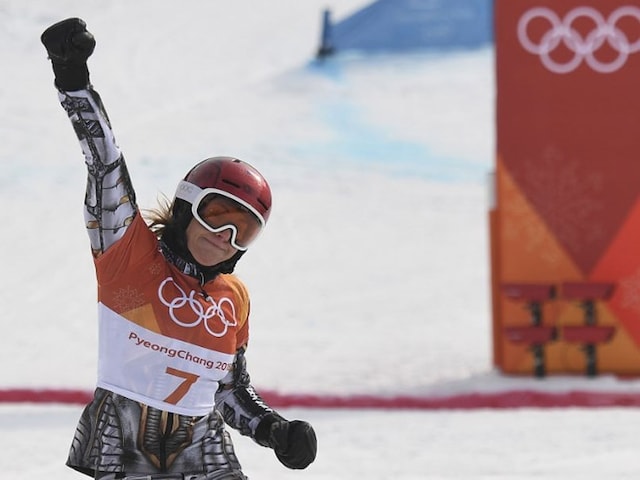 Ester Ledecka made history with an unprecedented snowboard and skiing double on Saturday, while Norway's all-conquering team set a new record for medals at a Winter Olympics. As President Donald Trump's daughter Ivanka descended on the Games in Pyeongchang, world champion Ledecka reigned supreme with a confident victory in the women's parallel giant slalom. It came after last week's shock super-G win for Ledecka, daughter of a Czech rock star and composer, who has stunned ski purists and confounded logic by taking gold in two very different events.

With Saturday's win, Ledecka joins Thorleif Haug and Johan Groettumsbraten as the only athletes to achieve a multi-sport double at the Winter Games. Both Norwegians won in cross-country and Nordic combined.

As Ledecka rewrote the rule book, Norway took bronze in the inaugural alpine skiing team event to reach 38 medals, breaking the record of 37 set by the United States in 2010.

Norway, led by their peerless cross-country skiers, have enjoyed a barnstorming Olympics. One day before the closing ceremony, they top the table with Germany on 13 golds, but with a vastly superior overall medals total.

Norway's haul was also boosted when Kristin Skaslien and Magnus Nedregotten were promoted to bronze in the mixed doubles curling, after Russia's Alexander Krushelnitsky failed a drugs test.

The International Olympic Committee's executive board was meeting behind closed doors on Saturday to decide whether to lift the suspension of Russia despite two of its athletes failing drugs tests.

The latest offender, women's bobsledder Nadezhda Sergeeva, has been kicked out of the Games after failing a test for a banned heart drug, the Court of Arbitration for Sport said.

Russia's Olympic committee was suspended in December over mass doping, but the IOC let 168 heavily vetted Russian athletes compete in Pyeongchang under a neutral flag as "Olympic Athletes from Russia".

A decision on Russia's ban is expected to come before the closing ceremony on Sunday, the same day Olympic Athletes from Russia play Germany in the men's ice hockey final.

In-form Wendy Holdener led Switzerland to victory in the new team ski event, with Austria taking silver ahead of Norway with the bronze.

Toutant had finished last in the slopestyle final but he scored 174.25 points from his best two jumps, with American Kyle Mack finishing on 168.75 points to take silver and Britain's Billy Morgan in bronze.

White House spokeswoman Sarah Sanders said the visiting Trump, who dined with South Korean President Moon Jae-in on Friday, was unlikely to meet or sit next to the North Korean delegation at Sunday's closing ceremony.