Alina Zagitova took the women's title for the Olympic Athletes from Russia by a slender margin of just 1.31 points from her friend. 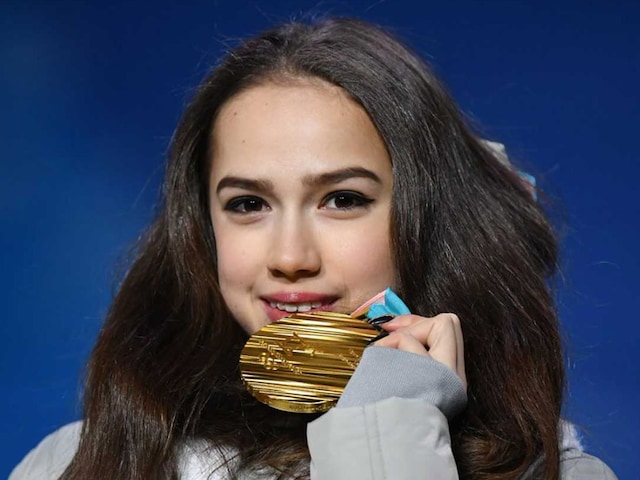 Teenage prodigy and figure skating sensation Alina Zagitova expressed disbelief on Friday after winning her duel with Evgenia Medvedeva to claim Russia's first gold medal at the Pyeongchang Olympics. The 15-year-old took the women's title for the Olympic Athletes from Russia by a slender margin of just 1.31 points from her friend, compatriot, training partner and arch-rival. Bronze went to Canada's Kaetlyn Osmond.

"I can't believe I'm the champion," said Zagitova after a fairytale debut season on the senior ciruit. "It'll take some time to sink in."

She beat two-time world champion Medvedeva despite both scoring matching 156.65 points in the free-skating.

"I did not get the feeling I'm the Olympic champion, I haven't got my medal yet! When I learned that I'd come first I felt very happy, but also very empty."

That feeling of emptyness came from being unable to take in immediately the realisation that the thing she had been striving for over the years, the fruit of all those 100s of hours of gruelling training back in Moscow, had suddenly become fact.

"I am realising that all the work I have put in on the way to this Olympic Games was not in vain.

"The empty feeling is hard to explain," she added.

"For 10 years now I've been skating, with all the highs and lows I've gone through and now I've finally achieved a gold medal at the Olympics......"

Zagitova's world record short program score of 82.92 just 48 hours earlier made the difference, giving her a combined total of 239.57.

Medvedeva, skating last, was unable to match her world record standard. She crumpled into the arms of her coach in tears after her routine to Anna Karenina gave her a combined score of 238.26.

"I felt like a bird who finally spread its wings when I started skating today," said the 18-year-old.

"This is the first time I broke down like this, it's never happened before, it was very strange, it was probably all the pressure being released."

Medvedeva, who broke her foot and was sidelined for two months from October, was initially unable to finish a television interview she was so overcome.

An Olympic official followed her round with a box of tissues.

The two ice princesses were among the 168 athletes from Russia who passed rigorous testing to compete as neutrals under the OAR banner in South Korea after Russia were banned over state-sponsored doping.

The winter sports' powerhouse may have had to wait until the three days from the end of the Games but their title famine was finally ended by the starlet from the Western Urals.

The girl in a red ballerina's costume has enjoyed a sensational debut season on the senior circuit.

She had got the better of Medvedeva in last month's European Championships, and came out on top again to become the second youngest Olympic ladies champion after American Tara Lipinski in 1998.

And displaying the composure of someone far beyond her years she produced a flawless four minutes free dance set to Austrian composer Ludwig Minkus's score to the ballet Don Quixote, about the fictional Spanish nobleman.

Despite falling short of the personal best free dance from the opening week's team event in which the OAR took silver she did enough to take the title.

As the music died away and she came to a standstill in the middle of the rink she broke into a broad smile, punching the air with her fist as if knowing she'd done enough.

And when the Gangneung Ice Arena announcer came over the tannoy with a hush descending on the near capacity 12,000 crowd to say "Alina Zagitova has scored 156.65 points" there wasn't a happier person in South Korea.

When she is presented with her gold medal later it will not be to the sound of the Russian national anthem nor with the Russian flag being hoisted but to the Olympic anthem and with the Olympic flag flying.

But if Olympic rulers the IOC decide to relax the ban - a decision is expected on Saturday - and allow Russia to march behind their country's flag at Sunday's closing ceremony, Zagitova will surely be the proudest of flagbearers.

Looking to the future the exciting news for skating fans is that all three medallists will clash again at the world championships in Milan next month.