Usain Bolt, who won this award in 2009, 2010 and 2013, walked away with the 'Oscar of Sports' for the fourth time, joining tennis legends Roger Federer and Serena Williams, and surfer Kelly Slater as four-time Laureus award winner 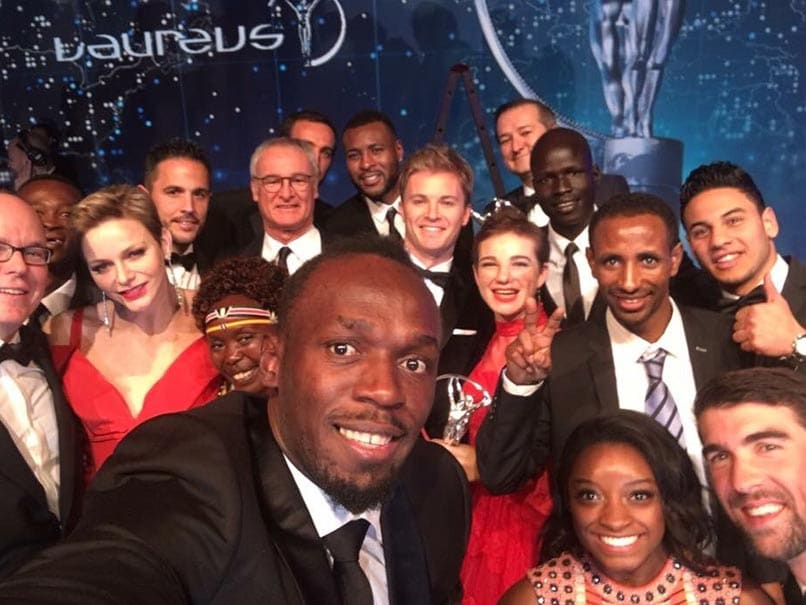 Some of the biggest names in world sports attended the glittering ceremony in Monaco.© Twitter/LaureusSport

Monaco: Sprint king Usain Bolt pipped the likes of Cristiano Ronaldo and LeBron James to win the 'Sportsman of the Year' trophy for the record-equalling fourth time while gymnast Simone Biles clinched the top honour in the women's category at the Laureus World Awards in Monaco on Wednesday. They are the little and large of sport - while Bolt stands 1.95 metres, Biles measures just 1.45 metres - but they were both giants at the Rio Olympics and enjoyed an ecstatic welcome as they received their statuettes here, the birthplace of the first ever Laureus awards 17 years ago.

Bolt, who won this award in 2009, 2010 and 2013, walked away with the 'Oscar of Sports' for the fourth time, joining tennis legends Roger Federer and Serena Williams, and surfer Kelly Slater as four-time Laureus award winner.

Bolt received his award from legendary Michael Johnson, who urged him not to break other people's records.To which Bolt responded by saying, "I am sorry to have broken your record."

"Thanks for the wonderful award. Laureus is one of the biggest awards for me. This is my 4th award and to be equalling it with someone like Roger Federer is great. I am in great company. It is special," he added.

Olympic gymnastics champion Biles notched up the 'Sportswoman of the Year' trophy, courtesy her brilliant show at the Rio Games, where she finished with four golds and a bronze.

"Wow! I am speechless, it's an honour to receive this award from Prince Albert and Nadia Comaneci who I looked up to for so many years. This award isn't only for me but also for all the other nominees in my category. We went through everything to be where we are, we have achieved so much, so thank you so much," said Biles.

The most decorated Olympian of all-time, Michael Phelps bagged the 'Comeback of the Year' award after returning to the swimming pool and scooping five more gold medals.

After the 2012 Olympics, Phelps retired from swimming but came out of the retirement and subsequently at the Rio Games last year, he bagged as many as five gold medals and a silver.

"Looking back at my career today, I can say that Rio was my greatest race," said Phelps.

Formula One champion Nico Rosberg claimed the Breakthrough of the year award. He ended runner-up in 2014 and 2015 but finally won the title last year.

Rosberg said that the last two laps in Abu Dhabi were the most sensational moments in his racing career.

"I am really happy to have won the 'Oscar of Sports'. The last two laps in Abu Dhabi, I didn't know if my life's dream was coming true. That stands second behind my wife giving birth to our girl," said Rosberg after winning the award.

In other categories, Italy's Beatrice Vio, the only quadruple amputee in international wheelchair fencing, clinched the disability award, while the Olympic refugee team, led by Tegla Loroupe, won the Laureus Sport for Good award for sporting inspiration at the function, which was hosted by Hollywood star Hugh Grant.

The powerful surf therapy programme "Waves for Change" bagged the Sports for Good award. The South Africa based project used sport for vulnerable young adults growing up in the country's most violent communities.

Another historic team performance was Chicago Cubs' first Major League Baseball World Series victory for 108 years. This feat won them Laureus Team of the year award. The winners were chosen by members of the Laureus World Sports Academy.

For the first time ever, sports fans had a chance to make their voices heard in a brand new Best Sporting Moment of the Year Award and that honour went to Barcelone Under-12 team.

Comments
Topics mentioned in this article
Other Sports Usain Bolt
Get the latest updates on India vs England Series, India vs England , live score and IPL 2021 Auction . Like us on Facebook or follow us on Twitter for more sports updates. You can also download the NDTV Cricket app for Android or iOS.