Fourcade won two golds at the 2014 Sochi Olympics and with his tally of four now holds the record for the most Winter Olympic gold medals won by a Frenchman. 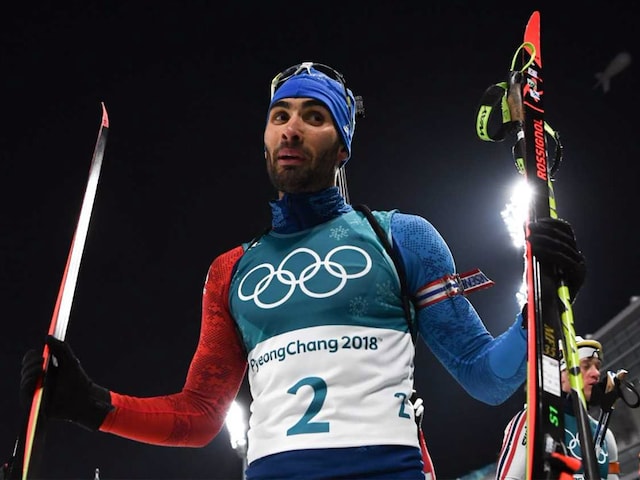 Frenchman Martin Fourcade wrote himself into the history books with a second biathlon gold at the Pyeongchang Olympics on Sunday, snatching victory by a whisker in a dramatic photo finish. Fourcade, 29, who won the pursuit title on Monday, thought he had lost the 15km mass start to Germany's Simon Schempp after the two men battled towards the line in a lung-bursting sprint. They sprawled across the finish and Fourcade slammed his ski stick into the snow and shook his head in frustration, clearly thinking he had lost.

But anguish switched to delight when the photo finish gave him the gold, clocking his time at 35min 47.3sec. The German picked up the silver a split second behind while his compatriot Erik Lesser claimed the bronze 11.2sec adrift of Fourcade.

Fourcade won two golds at the 2014 Sochi Olympics and with his tally of four now holds the record for the most Winter Olympic gold medals won by a Frenchman. Alpine skier Jean-Claude Killy won three at the 1968 Olympics in Grenoble.

Earlier, Fourcade had claimed the biathlon pursuit gold medal. Army officer Fourcade, 29, beat Sweden's Sebastian Samuelsson into second place with Germany's Benedikt Doll taking the bronze. Following his upset eighth place in the sprint on Monday, Fourcade collected only one penalty point for shooting in blustery, freezing conditions and crossed the line with 12 seconds to spare over Samuelsson. Already France's most decorated winter Olympian prior to the race, Fourcade brings his tally to five medals overall including three golds.