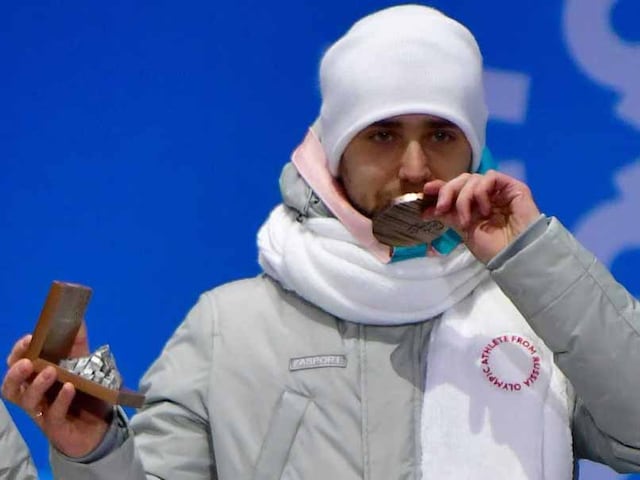 Krushelnitsky was stripped of his Pyeongchang Olympics bronze medal after admitting doping.© AFP

Russian curler Alexander Krushelnitsky was stripped of his Pyeongchang Winter Olympics bronze medal Thursday after admitting doping, the Court of Arbitration for Sport said. The 25-year-old was one of 168 Russian athletes who passed rigorous testing to compete as neutrals in Pyeongchang after Russia were banned over a major doping scandal. "The athlete has admitted the anti-doping rule violation; he is disqualified from the mixed doubles curling event," the court said in a statement.

Krushelnitsky, who won mixed doubles bronze along with his wife, Anastasia Bryzgalova, has protested his innocence and officials have hinted at foul play.

But Krushelnitsky decided not to contest Thursday's CAS hearing, saying it was "stupid to deny" testing positive for meldonium, an endurance booster.

However, CAS said Krushelnitsky, who is provisionally suspended, "reserved his rights to seek the elimination or reduction of any period of ineligibility based on 'no fault or negligence' following the conclusion of the Games".

The International Olympic Committee will this week decide whether to lift Russia's suspension in time for Russian athletes to carry the national flag at Sunday's closing ceremony, taking into account the conduct of their athletes in Pyeongchang.

Norway's Kristin Skaslien and Magnus Nedregotten lost out to Krushelnitsky and Bryzgalova in the bronze medal play-off. Reallocating the medal is down to the World Curling Federation and the International Olympic Committee, CAS said.