Nick Foles was named Super Bowl Most Valuable Player after the game. 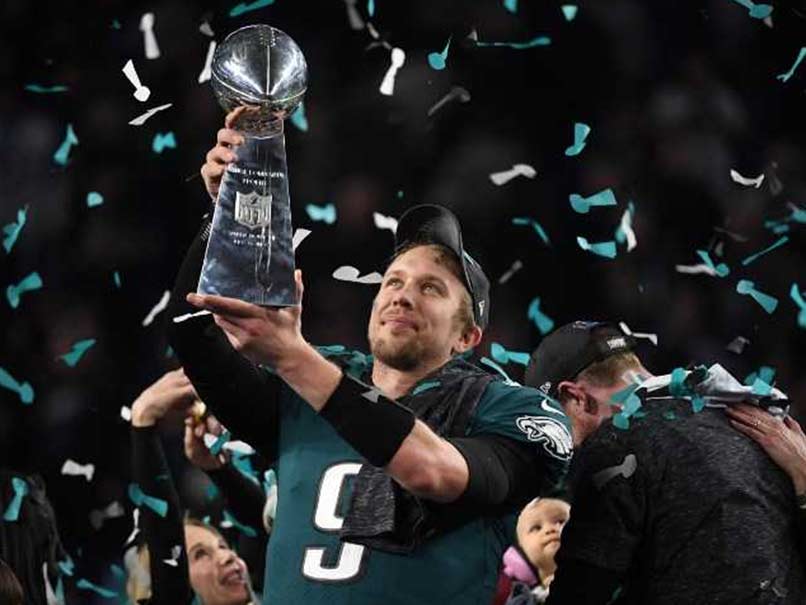 The Philadelphia Eagles scored an upset 41-33 victory over the New England Patriots to win their first ever Super Bowl here Sunday after a late Tom Brady fumble ended the quarterback's tilt at history. A magnificent performance from the Eagles' back-up quarterback Nick Foles -- who threw three touchdowns and nearly 400 yards -- had helped Philadelphia into a 38-33 lead with just over two minutes left in a high-scoring game at Minneapolis's US Bank Stadium. The stage was set for Brady, 40, to mount one of his famous comeback drives as the clock ticked down and the Patriots took possession.

Brady, who had been bidding to become the oldest quarterback to win the Super Bowl and the first man to win six Lombardi Trophies, sat on the turf in disbelief as the Eagles erupted in celebration.

Philadelphia, who had taken the lead on the preceding drive when Foles found Zach Ertz in the end zone, then saw Jake Elliott kick a 46-yard field goal to take an eight-point lead at 41-33.

There was still a minute left for the Patriots to launch one last drive.

But Philadelphia were not going to be denied, and a desperate Brady Hail Mary failed to find a receiver as the clock ran out, and the Eagles celebrated as green and silver confetti exploded across the stadium.

It was a bitter end for Brady, who incredibly threw for more than 500 yards in a game that set a record for combined offensive yardage.

Yet the night belonged to Foles, who had only come into the Eagles' starting line-up in December after a season-ending injury to star quarterback Carson Wentz.

Foles was named Super Bowl Most Valuable Player after the game -- but unusually could find himself without a job next season if he remains at the Eagles as a back-up.