Mahindra team gets another top-10 finish in Motorcycle Grand Prix

This was the third of 17 rounds, and in every race so far the only Indian team in motorcycle grand prix racing has taken at least one top-10 position at every round. 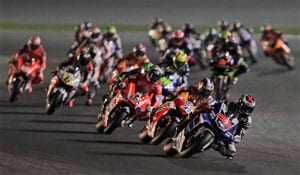 However, there was bad luck for Miguel Oliveira who missed out on points after being knocked off before finishing 16th.

After starting 15th on the grid, the 18-year-old Portuguese rider had forced his way to near the front of a big pack disputing fourth place when the accident happened on the 11th lap.

For Vazquez, it was the reward for a strong ride, the MGP3O's superb handling helping him also battle in the same big group as his team-mate.

The race was stopped early after a crash, the second time in succession a red flag took the place of the chequered flag in the very competitive Moto3 class. This time more than two thirds distance had been completed, and the results were taken from one lap earlier - the 15th of a scheduled 23.

This was the third of 17 rounds, and in every race so far the only Indian team in motorcycle grand prix racing has taken at least one top-10 position at every round.

The next race is at Le Mans in France in two weeks -another twisty circuit where the brand-new MGP3O's handling strengths should pay dividends.

Comments
Topics mentioned in this article
Dutch Grand Prix Other Sports
Get the latest updates on ICC T20 Worldcup 2022 and CWG 2022 check out the Schedule, Live Score and Medals Tally. Like us on Facebook or follow us on Twitter for more sports updates. You can also download the NDTV Cricket app for Android or iOS.