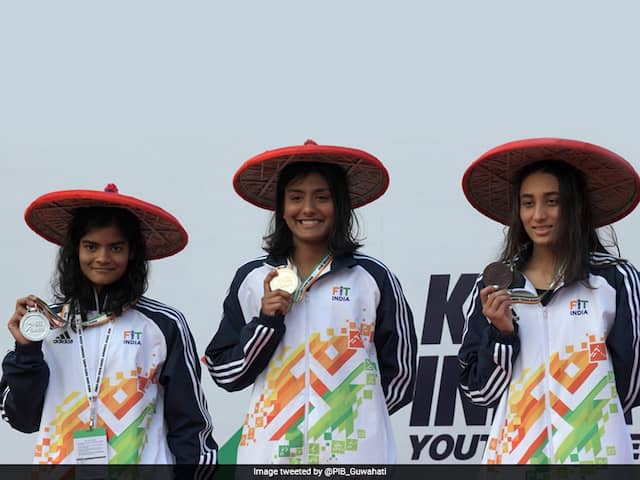 West Bengal's Soubrity Mondal made a splash at the swimming pool by picking up three gold medals while Maharashtra's undisputed reign on top continued by crossing the 200-medal mark in the Khelo India Youth Games in Guwahati on Monday. With the three gold from the pool on Monday, Mondal and Kenisha Gupta joined fellow swimmer Shivangi Sarma (Assam), gymnast Priyanka Dasgupta (Tripura), rhythmic gymnast Asmi Badade and cyclist Pooja Danole (both Maharashtra) as well as artistic gymnast Jatin Kanojia (Uttar Pradesh) as owners of four gold medals. Maharashtra remained entrenched at the top of the medals tally with 63 gold.

The state drew immense joy in crossing the 200-medal mark, finishing the day with 204 after despite its women's U-21 basketball team losing the final to Kerala 63-88 in the title clash.

Haryana's only gold came through their girls U-17 hockey team, beating Jharkhand. Haryana led 2-1 through goals by Pinki and Dimple but Deepika Soreng completed her brace in the last minute to force a shootout. Kanika Siwach and Sonam scored for Haryana while Deepika Soreng found the mark for Jharkhand.

The West Bengal swimmer then helped the state's 4x100m Medley Relay squad win gold in the face of stiff competition from Assam.

Chandigarh won the boys under-17 hockey gold, also via the penalty shoot-out after sharing four goals in regulation time with Uttar Pradesh.

A goal in the final quarter by Sumit helped Chandigarh draw level with Uttar Pradesh a second time to force the shoot-out.

In the bronze medal play-off, a last-ditch goal by Arshdeep Singh Jr saw Punjab take Odisha into the shoot-out.

He left Maharashtra lifters Ritesh Rajendra Mhaishale (248kg) and Sanidhya Sanjay More (243kg) in his wake to give the home crowd much to cheer as they won two of the six gold at stake on Monday.

Sikkim joined the medals chart with a bronze from weightlifting. Prema Tshering Sherpa was grinning as he made it to the podium, thanks in no uncertain terms to Uttarakhand's Bittu Rajput registering no lift in snatch and Haryana's Parveen failing to lift his chosen entry clean and jerk load of 150kg in three attempts. Parveen was the leader after the snatch, with a best of 124kg.

In badminton under-21 conetst, top-seeded Satish Kumar (Tamil Nadu) will take on No. 2 Amit Rathore (Madhya Pradesh) in the final.

Punjab and Kerala ran out easy winners in the men's and women's U-21 basketball finals as they beat Tamil Nadu and Maharashtra respectively.

In the under-17 final, Rajasthan overcame Delhi's third quarter surge of 30 points with smart play to win 86-79.