A rampant New Zealand scored five tries as they eventually ran away to a 39-0 victory over a defensively dogged Argentina in the Rugby Championship. 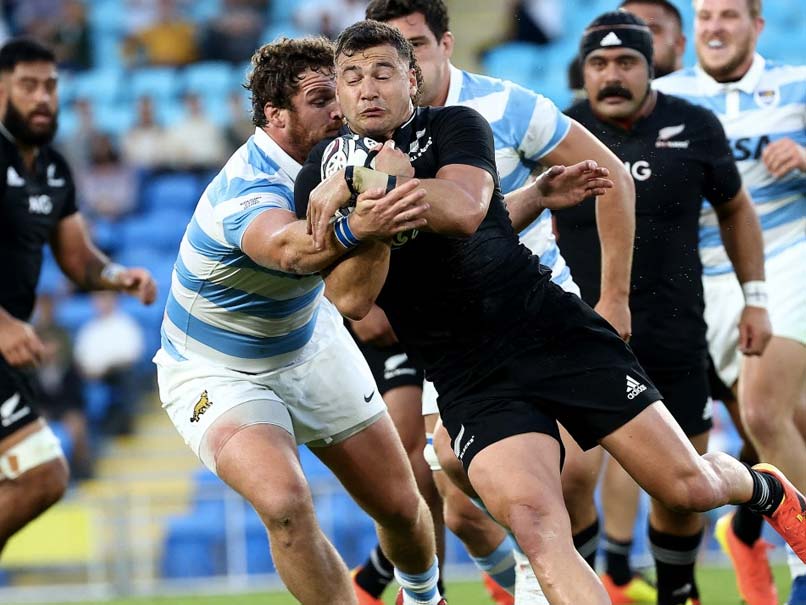 A rampant New Zealand scored five tries as they eventually ran away to a 39-0 victory over a defensively dogged Argentina in their Rugby Championship clash at the Cbus Super Stadium on the Gold Coast Sunday. The scoreline did not fully reflect the All Blacks' dominance with Argentina producing a heroic defensive effort that included more than 200 tackles. In the opening match of a double-header -- with Australia against South Africa to follow -- the All Blacks secured their third bonus point in as many matches to stay top of the championship table.

"We're delighted. They're a tough team to play and history shows that they're hard to score tries against," All Blacks coach Ian Foster said, adding there was still plenty to work on.

"Clearly we left a few opportunities on the park and some of our decision making, particularly in the second half, I think we got a little flustered in the attacking 22 and threw away a little bit."

New Zealand were determined not to be caught napping as they were last year when Los Pumas beat the All Blacks for the first time.

And Rieko Ioane, a late addition to the New Zealand starting line-up when Anton Lienert-Brown was sidelined by a troublesome hamstring, was gifted the opening try of the match in the first 10 minutes.

As the All Blacks swept towards the line, Bautista Delguy attempted an intercept but could only knock the ball back over the line and Ioane pounced for the try.

With New Zealand enjoying nearly 70 percent possession for most of the first half, only an exceptional Argentina rearguard kept the scoreline to 7-0 after 30 minutes.

As much as the All Blacks dominated possession and territory they could not break the resolute Argentinian defence and eventually resorted to a Beauden Barrett penalty in the 33rd minute to move the scoreboard.

Jordie Barrett was denied a try when he fielded a cross-kick but came down on the dead ball line.

Santiago Cordero intercepted a pass from Ioane to an unmarked George Bridge and Asafo Aumua was held up over the line.

Then, in the closing stages of the first half Sevu Reece and Dalton Papalii added tries for the All Blacks with Pablo Matera, one of Argentina's most effective tacklers, in the sin bin after referee Nic Berry warned about repeated infringements.

With Matera still off the field at the start of the second half, Beauden Barrett stepped around three tacklers before flicking a one-handed pass to Luke Jacobson for a fourth try.

But with the All Blacks so dominant, impatience took over and several attacks at the line fell short before Jacobson scored his second after replacement prop Carlos Muzzio was yellow carded as Argentina again suffered disciplinary problems.

They gave away 23 penalties in their last Test against South Africa and then 18 against the All Blacks and coach Mario Ledesma could not hide his disappointment.

"It's difficult to get any grasp of the game when you're being so undisciplined," he said.

But Ledesma said that overall he was proud of the effort.

"Normally when you play like that against the All Blacks and you give them 70 percent territory and possession and that many penalties and two yellow cards, normally the score is much higher," he said.