Deepika-Talukdar will face the US duo of Khatuna Lorig and Brady Ellison in the final. The recurve finals will be held Sunday, while medal-deciding events in the compound section are scheduled for Saturday. 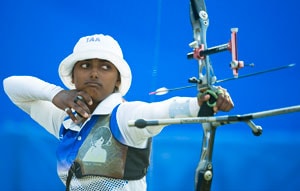 Deepika Kumari kept herself in line for a double gold feat including one with Jayanta Talukdar, even as the other Indians came a cropper in Archery World Cup Stage-I in Shanghai.

According to information received here, there was another ray of hope in the compound women's team event where the trio of Trisha Deb, Gagandeep Kaur and Lily Chanu P on Friday entered the bronze play-off.

In pursuit of her second individual World Cup gold after 2002, Deepika will face another Beijing gold medalist Ok-Hee Yun in the final.

The former world No 1 Indian archer then partnered Jayanta Talukdar to beat the Mexican duo of Aida Roman and Juan Rene Serrano in the semifinal of the recurve mixed team.

Deepika-Talukdar will face the US duo of Khatuna Lorig and Brady Ellison in the final. The recurve finals will be held Sunday, while medal-deciding events in the compound section are scheduled tomorrow.

Two-time Olympian Dola Banerjee failed in her comeback tournament as she finished a disappointing 17th in the individual event while the recurve women's and men's teams were knocked out in the quarters.

Dola's younger brother Rahul finished an identical 17th in the individual event as Deepika and Talukdar's splendid performance brought some joy in the Indian camp.

Ranchi girl Deepika put up a consistent show as the world No 3 rallied to beat Anastasia Pavlova of Ukraine 6-4 before showing the door to 2008 Olympic gold medalist Joo 7-3 in the semi-final.

India also have a bronze medal hope in the compound women's team event where they will face Italy in the playoff tomorrow.