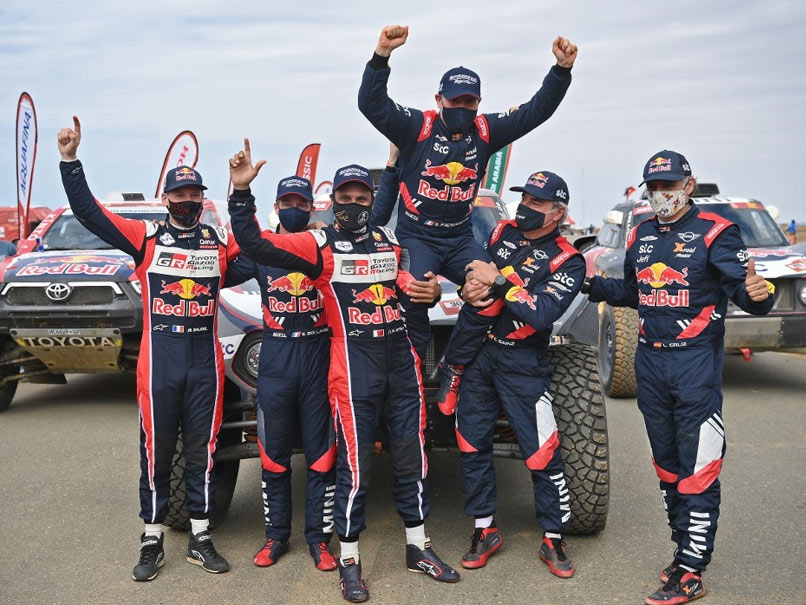 Stephane Peterhansel celebraates with his teammates after winning the Dakar rally in Saudi Arabia.© AFP

The 55-year-old Mini driver, aided by co-pilot Edouard Boulanger, finished 14min 51sec ahead of Qatari Nasser al-Attiyah (Toyota), with Spain's Carlos Sainz -- winner of Friday's 12th and final stage from Yanbu to Jeddah -- rounding out the podium in another Mini.

Peterhansel's victory came shortly after news that French motorcyclist Pierre Cherpin had died from injuries sustained in a crash on the seventh stage, becoming the race's first fatality this year.

Cherpin's death takes to 27, including 22 motorcyclists, the number of competitors who have lost their lives since the inaugural Dakar Rally in 1979.

Peterhansel said he still had the "same emotion" as he did after his first victory back in 1991.

"To win the Dakar is always really complicated," he said. "There are no easy victories on the Dakar. This one from the outside maybe looked easy, but it was not easy every day to manage the small gap over Nasser.

"Experience and being able to stay calm helped to win.

"The first victory on the motorcycle is my favourite, because it was the one that I dreamed a lot of and now it's really a bonus. Winning is always a big emotion, but the first victory was the best one."

Argentina's Kevin Benavides won the motorbike category, leading home defending champion Ricky Brabec of the United States by 4:56 in a first Honda 1-2 since 1987.

Benavides, who broke his nose in a crash on the fifth stage that saw his helmet shattered, became the first South American to win the category, calling it "absolutely crazy".

"The important thing is to always continue, to stay calm and focused day by day and to work hard day by day."

Brabec admitted to feeling "pretty bummed" at not defending his title, but added that "number two will work".

"I didn't even know that Honda had already won a one and two finish. I wasn't even born in 1987! It's cool to go one and two again."