India, on day 5 of the Asian Games 2018, won a silver (shooting) and two bronze medals (tennis and kabaddi). 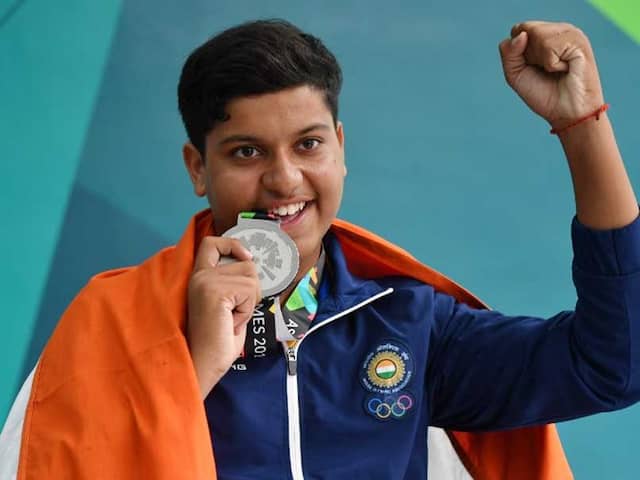 Indian shooting's teenage brigade threw up another surprise in Shardul Vihan's silver in men's double trap event but a Kabaddi gold was lost in a shocker as the country endured its most disappointing day at the 18th Asian Games on Thursday. With no gold added to the tally today, India slipped to 10th with four gold, four silver and 10 bronze for a total of 18 medals. The 15-year-old Vihan, with his double trap silver, became the youngest Indian shooter to win a medal at the Games where a 16-year-old Saurabh Chaudhary (10m air pistol) had become the youngest Indian shooter with a gold. Vihan shot 73 in the final after topping the qualification earlier in the day. The gold went to 34-year-old South Korean Hyunwoo Shin and bronze to 42-year-old from Qatar, Hamad Ali Al Marri.

"Sir (coach Mansher Singh) ne bola, kal sab tere se badi umar ke honge. Chad ke khelna (all competitors will be a lot older to you, just shoot fearless and they will be wary of you). I just did that," said Shardul Vihan.

A piece of joyous history was scripted by him at the shooting ranges of Palembang but some 600km away in Jakarta, the kabaddi team produced a stunningly abysmal performance to sign off with a bronze.

Ajay Thakur and his men were left wide-eyed in shock as two-time runners-up Iran finally got the better of India with a gladiatorial performance at Theatre Garuda. The 18-27 defeat will not be easily forgotten for it ended India's unchallenged kabaddi domination in the Asiad since the sport was first introduced in 1990.

The fact that it's a sport indigenous to the country only adds to the humiliation and perhaps some soul-searching would be in order given that crores had been pumped into creating the Pro-Kabaddi League, complete with some Bollywood stars as team owners.

"We lost the match due to the captain's overconfidence, injury played a part, and super tackle," dejected India coach Ram Mehar Singh said after the shocking defeat.

Among the positives to count today was Rohan Bopanna and Divij Sharan's gritty win to enter the men's doubles final, putting India in strong contention for a gold tomorrow. Bopanna and Sharan were fighting it out against the Japanese pairing of Shimbakuro S and Uesugi Kaito and having lost the first set 4-6, the Indians switched sides before emerging 6-3 10-8 in the next two sets.

In singles, however, Ankita Raina bowed out with a bronze medal after losing in the semifinals. Ankita played her heart out against top seed Shuai Zhang before settling for bronze.

India were also assured of at least a bronze medal in the squash competition as the country's top ranked player Saurav Ghosal set up a quarterfinal clash with compatriot Harinder Pal Sandhu in the men's singles event.

Both Joshna Chinappa and Dipika Pallikal Karthik made it to the women's singles quarterfinals with facile wins.

In badminton, PV Sindhu had to dig deep to down a fighting Vu Thi Trang of Vietnam but Saina Nehwal eased into the next round.

World Championship silver medallist Sindhu faced stiff resistance from world number 52 Trang before prevailing 21-10 12-21 23-21 in a tough opening round which lasted 58 minutes. In contrast, Saina just walked into the second round with a crushing 21-7 21-9 win over Iran's Soraya Aghhajiagha in just 26 minutes.

But, archery continued to throw up disappointments, the fancied Deepika Kumari being a major one. The former world number one flopped yet again at the big stage on a depressing day for India's recurve archers, whose challenge ended at the Games.

Only Atanu Das managed to reach the quarterfinals while the other three fell by the wayside at the preliminary stages. Das lost his quarterfinal 3-7 to Indonesia's Riau Ega Agata Salsa Billa.

There was heartbreak in weightlifting too. Ajay Singh finished a creditable fifth with a personal best effort but senior compatriot and Commonwealth Games gold-medallist Sathish Sivalingam got injured during the men's 77kg category competition.

Sathish, who holds the national record of 339kg, suffered a thigh injury during a failed attempt of 178 kg in clean and jerk to eventually lift a total of 314kg (144kg + 170kg).

In swimming, national records were shattered but no medals came off the effort. Srihari Natraj twice bettered his in the 200m backstroke but could finish only sixth in the final while Virdhawal Khade ended last in the 50m butterfly.

A positive start was, however, made on the golf course where Aadil Bedi shot a bogey-free 69 that placed him and the Indian team tied second at the end of the first round. Bedi was one shot behind the reigning Australian Amateur champion, Keita Nakajima of Japan, one of the favourites. But the Indian rowing contingent had a disastrous day, missing out on as many as four medals including in fancied events like men's single sculls and double sculls in Palembang.

Gold contender Dattu Bhokanal was a major disappointment as he finished sixth and last in the single sculls final, clocking 8:28.56. He was consistently within the seven-minute mark in the run-up to the Games and his performance even in the Heats was nowhere close to his below-par effort today.