Iran has teams in both the men's and women's finals. 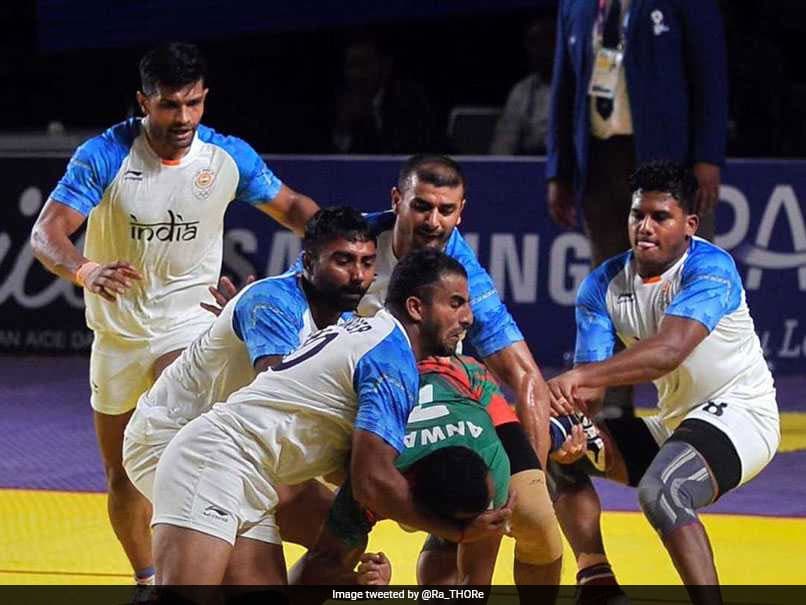 India settled for the bronze medal along with Pakistan.© Twitter

Seven-time Asian Games gold medallists India failed to reach the Asian Games men's kabaddi final for the first time after a shock 18-27 loss to Iran in the semi-final on Thursday. India, who had won the men's kabaddi gold in all the earlier seven Asian Games after the sport was introduced in 1990 in Beijing, produced the worst-ever show in the continental mega multi-sporting event. The country settled for the bronze medal along with Pakistan, who had lost to South Korea in the other semi-final. India had finished second in the group stage after a loss to South Korea.

It was a nightmare that unfolded for India at Theatre Garuda where the Iranians played like champions and India seemed completely out of sorts.

The writing was perhaps on the wall given that Iran had come close to upstaging India in the 2014 finals in Incheon.

Considered another Asian powerhouse, Iran had finished runner-up in the last two Asian Games and will square off for gold as firm favourites against South Korea, a team that beat India in the group stage this time.

The match saw Pro-Kabaddi League players facing each other with Iran having the likes of defenders Fazel Atrachali and Abozar Mighani.

The Indian team which had PKL stars like Ajay Thakur, Pardeep Narwal, Rahul Chaudhari, Deepak Niwas Hooda became the first to finish an Asian Games without the top prize.

India began the proceedings with a 6-4 lead but the defending champions lost a chance to inflict an all-out on Iran.

Iran made a strong comeback and Ajay Thakur was dismissed after sustaining a cut on the forehead.

Another supertackle by Iran and this time Monu Goyat was taken down.

Iran levelled for the first time in the game and the scoreline read 8-8 before they took the lead.

India managed to inflict a tackle and draw level. Iran continued to have fewer players on the mat but their defensive pair of Attrachali and Mighani kept them in the game.

The tense match was levelled at 9-9 at half time but Iran surged ahead to 14-11 with some fine tackles by its players.

India trailed 12-16 with 10 minutes to go and Rahul Chaudhari was brought in to salvage some quick points. It was desperate times for the Indian team.

Rishank Devadiga was then dismissed and Iran's lead increased to five points at 19-14.

India were under tremendous pressure with less than five minutes to go in the match but Iran held on to their nerves to fashion the most shocking upset in Asian Games kabaddi.

Comments
Topics mentioned in this article
Kabaddi Asian Games 2018 Other Sports
Get the latest updates on IPL 2021, check out the IPL 2021 Schedule and Indian Premier League Live Score . Like us on Facebook or follow us on Twitter for more sports updates. You can also download the NDTV Cricket app for Android or iOS.