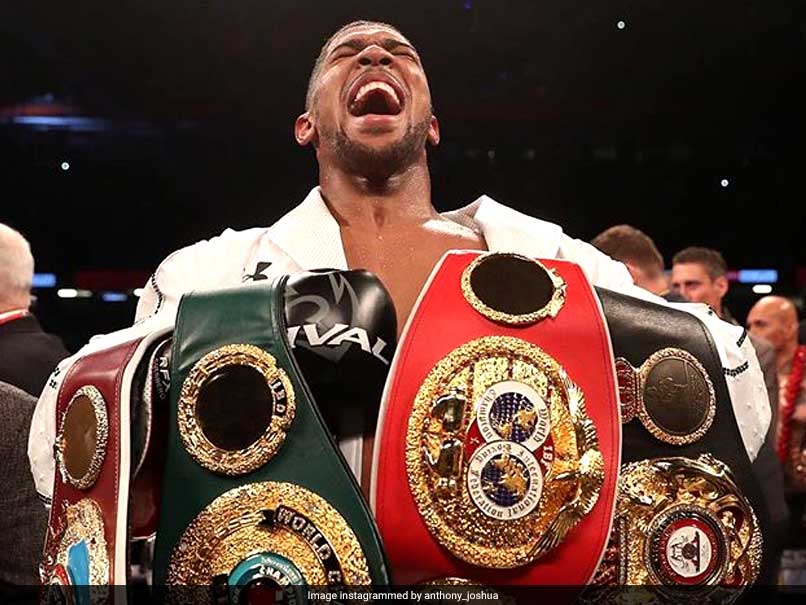 Britain's Anthony Joshua will defend his World Boxing Association, World Boxing Organization and International Boxing Federation heavyweight titles against Russia's Alexander Povetkin at London's Wembley Stadium on September 22, promoter Eddie Hearn announced on Monday. Povetkin is the mandatory challenger for Joshua's WBA title and a successful bout against the Russian would give the London 2012 Olympic champion greater freedom to choose his next opponent. Joshua had been hoping to fight fellow unbeaten heavyweight champion Deontay Wilder, who holds the World Boxing Council belt, but he could yet face the American in April 2019.

"I can't wait to get back in the ring. The end of March feels a long time ago now," said Joshua, who beat Joseph Parker of New Zealand by unanimous points decision in Cardiff on March 31.

"Povetkin is a serious challenge that I will prepare meticulously for. He has serious pedigree and only a fool would underestimate what he brings to the table.

"Training hasn't stopped for me, but the next 10 weeks ahead will be intense both mentally and physically.

"I will push myself to breaking point to make sure I am in peak condition for another huge night for British boxing at Wembley Stadium on September 22nd."

Strongest in the world

Wilder, 32, improved to 40-0 with 39 knockouts when he knocked out previously unbeaten Cuban Luis Ortiz in the tenth round in Brooklyn, New York, on March 3.

Meanwhile Povetkin, 38, knocked out David Price on the undercard of Joshua's victory over Parker. He previously fought for the titles Joshua now holds in a 2013 defeat by Wladimir Klitschko.

"The battle for the world title has always been my goal," Povetkin said.

"I fought for the moment to face the strongest in the world and on September 22nd I get my opportunity.

"Anthony Joshua has four belts (including the lightly-regarded International Boxing Organization title) and I want them all.

"I'm glad that our fight will finally take place. The meeting of two Olympic (super-heavyweight) champions (Povetkin won in 2004, Joshua in 2012) in the ring is destined to be a breathtaking event."

Joshua's promoter Eddie Hearn added: "Last time (Joshua) was there (at Wembley against Klitschko, in April 2017) he produced one of the most dramatic fights and endings in the history of the sport, and I expect this fight to be full of energy and drama.

"Povetkin is a top-three heavyweight and extremely dangerous but in AJ I see the best heavyweight in the world and I think we will see a major statement."