Germany's "Blade Jumper" Markus Rehm leapt to gold at the Tokyo Paralympics on Wednesday but failed to topple his own long jump world record. 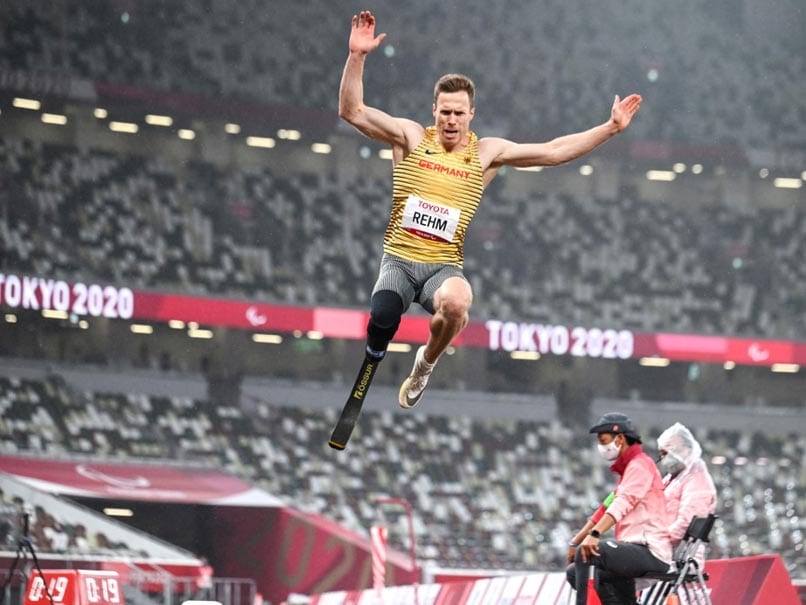 Germany's "Blade Jumper" Markus Rehm leapt to gold at the Tokyo Paralympics on Wednesday but failed to topple his own gargantuan long jump world record. The 33-year-old set a new record in June of 8.62m, which would have won him gold at every Olympics since 1992, and set his sights on breaking it again in Tokyo. A leap of 8.18 was his best effort on a cool and drizzly evening, but it was more than enough to give him his third straight title and a fourth Paralympic gold overall. France's Dimitri Pavade took silver with a jump of 7.39, while Trenten Merrill of the US claimed bronze on 7.08.

Ahead of Rehm's appearance, Tunisian Raoua Tlili took her second gold of the Games with a world-record discus throw in the F41 final, beaming and jumping with delight at the result.

She said her victory was the result of an incredible surge of support from her fellow Tunisians back home.

"All Tunisians gave me confidence (by) writing (to) me on Facebook and Instagram, 'Go Raoua, we expect your gold medals'," said Tlili, who retained her shot put title on Friday.

There was controversy elsewhere though, with International Paralympic Committee spokesman Craig Spence condemning what he described as a wave of social media abuse after a Malaysian shot putter was disqualified and missed out on a gold medal for failing to appear on time.

Muhammad Ziyad Zolkefli was allowed to compete in the F20 final on Tuesday night despite being late to the call room.

He finished first, breaking the world record and winning gold. But afterwards a referee and jury both determined he had no good reason for being late.

Zolkefli and two other athletes were late, with Spence saying they argued they had not heard the announcement to gather or that it was in a language they did not understand.

"But all the other athletes were on time," Spence said.

The gold went instead to Ukraine's Maksym Koval, who Spence said was now "getting a lot of abuse from Malaysians".

"People say the Ukrainian stole the gold. No, absolutely not. The Ukrainian had nothing to do with it. It was the athletes that were late," Spence said.

And the IPC spokesman said it was not the first time Malaysian social media users had directed abuse at the Paralympic body, recalling a wave of attacks after the country was removed from the 2019 swimming championships.

"Hopefully it will pass and die down. But it's just disappointing again," Spence said.

"Makes it all worth it"

On the eighth day of competition in Tokyo, 43 gold medals were up for grabs.

Tokyo's first gold in boccia, a sport similar to boules that is designed for athletes with neurological impairments that impact motor function, went to Adam Peska of the Czech Republic.

And 90 qualified badminton players are gearing up for play as their sport makes its Paralympics debut, with France's double world champion Lucas Mazur facing a challenge from India's Tarun Dhillon in the men's SL4.

Taekwondo, the other new sport at this Games, kicks off on Thursday.

With almost all spectators banned from the Paralympics over coronavirus fears, there have been few opportunities for athletes to interact with the Japanese public.

But US high jumper Sam Grewe, who won gold in the T63 on Tuesday, shared online a letter handed to him by a Tokyo 2020 employee who described the athlete's impact on his family.

Grewe's leg was amputated after he was diagnosed with a cancerous tumour in his knee as a teenager, and in his letter Masaki Kando said his 13-year-son had also been diagnosed with a tumour on his knee and undergone a treatment known as rotationplasty.

"I was very anxious," Kando admitted about his son's treatment, saying his family had learned about Grewe on social media.

"High Jump the World Champion! You gave us great courage to my family. We are grateful to you."

Grewe, who is training to be a doctor to increase the representation of people with disabilities in medicine, said of the letter: "Win or lose, this is what it's all about."

Comments
Topics mentioned in this article
Olympics 2020 Olympics
Get the latest updates on ICC Women's Cricket World Cup 2022 and IPL 2022, check out the Schedule , Live Score and IPL Points Table. Like us on Facebook or follow us on Twitter for more sports updates. You can also download the NDTV Cricket app for Android or iOS.