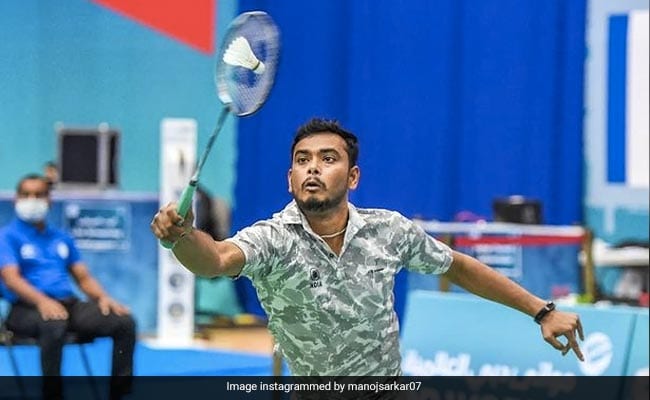 India's Manoj Sarkar defeated Japan's Daisuke Fujihara to clinch bronze in the badminton men's singles SL3 event at the ongoing Tokyo Paralympics. The 31-year-old won in straight games, sealing a 22-20 21-13 win on Saturday. Sarkar crashed to an 8-21 10-21 defeat in the semifinals against Great Britain's Daniel Bethell, but bounced back strongly to coast past Fujihara. In SL3 classification, athletes with lower limb impairment are allowed to compete. In a match that lasted for 47 minutes, Sarkar managed to win the first game 22-20, in what was turning out to be a cagey encounter.

The Indian shuttler found his footing in the second game, cruising to a 21-13 win against his Japanese opponent.

Sarkar began to play badminton at the age of five, and played inter-school competitions against able-bodied shuttlers till the 11th grade. He started to compete in para-badminton events in 2011, winning a gold medal in the SL3 singles at the 2016 Asian Championships in Beijing.

He also received the Arjuna Award in 2018, and was named Para Sportsman of the Year at the Sportstar Aces Awards in 2019.

Also, India's Pramod Bhagat, who is also the reigning world champion, claimed a historic gold in this event, defeating Bethell in the summit clash. Bhagat registered a 21-14 21-17 over Bethell in a final which lasted for 45 minutes.

He is also in contention for a bronze medal in mixed doubles SL3-SU5 class, with his partner Palak Kohli. They will face Japan's Daisuke Fujihara and Akiko Sugino.

Comments
Topics mentioned in this article
Olympics 2020 India Badminton
Get the latest updates on T20 World Cup, check out the T20 World Cup Schedule and Live Score . Like us on Facebook or follow us on Twitter for more sports updates. You can also download the NDTV Cricket app for Android or iOS.