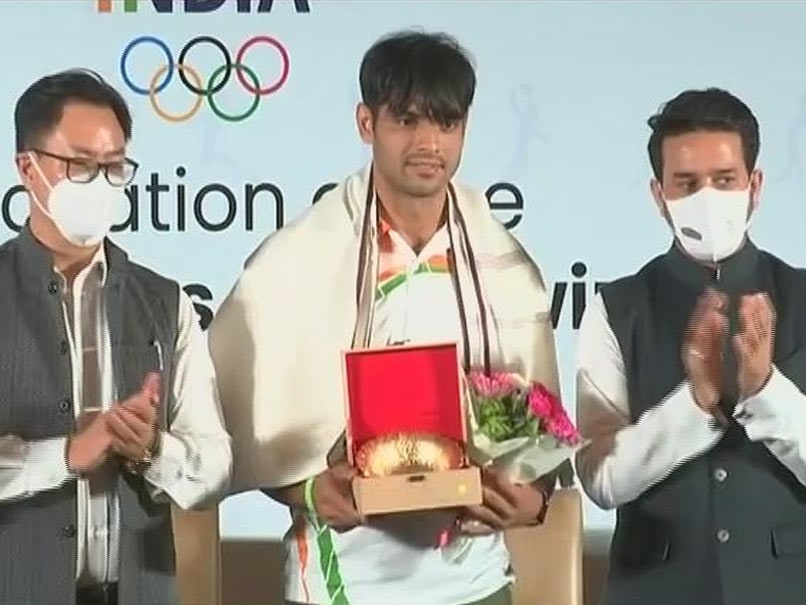 Neeraj Chopra, Lovlina Borgohain, Bajrang Punia, the men's and women's hockey teams among others were in attendance as the felicitation ceremony for India's Olympic medallists was completed in New Delhi. India's Olympic stars were felicitated in New Delhi by Sports Minister Anurag Thakur and former Sports Minister Kiren Rijiju among others. Athletes from the Indian contingent returned home from the Tokyo Olympics on Monday and were accorded a grand welcome. Olympic gold medallist Neeraj Chopra, who won the men's javelin throw final at the Games, silver-medallist boxer Lovlina Borgohain and Bajrang Punia, who won a bronze medal in wrestling, were some of India's Olympic medal winners in attendance. The men's and women's hockey teams also tasted glory with the men's team ending their 41-year wait for an Olympic medal by winning bronze and the women's team finishing fourth. Both hockey teams were felicitated.

Here Are The Highlights From The Felicitation Ceremony

PV Sindhu Lovlina Borgohain
Get the latest updates on ICC Women's Cricket World Cup 2022 and IPL 2022, check out the Schedule , Live Score and IPL Points Table. Like us on Facebook or follow us on Twitter for more sports updates. You can also download the NDTV Cricket app for Android or iOS.