The cardboard beds at the Tokyo Olympic Village are "sturdy", organisers reassured on Monday, after a report warned they weren't strong enough for sex. 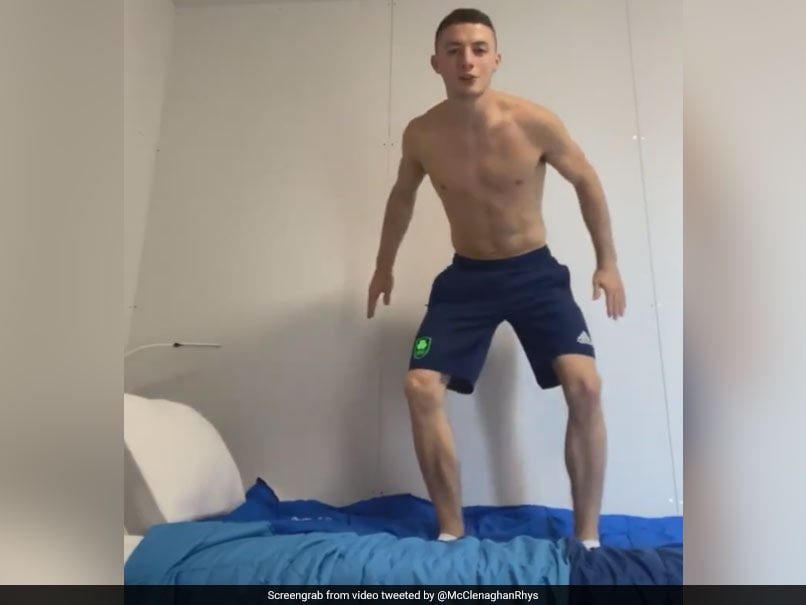 Irish gymnast Rhys McClenaghan filmed himself jumping repeatedly on a bed at the Olympic Village.© Twitter

The cardboard beds at the Tokyo Olympic Village are "sturdy", organisers reassured on Monday, after a report warned they weren't strong enough for sex. Irish gymnast Rhys McClenaghan filmed himself jumping repeatedly on a bed to prove the point, after the report in the New York Post claimed the beds were deliberately flimsy to promote social distancing. "The beds are meant to be anti-sex. They're made out of cardboard, yes, but apparently they're meant to break with sudden movements. It's fake -- fake news!" McClenaghan said in the video posted on Twitter.

Thanks for debunking the myth. You heard it first from @TeamIreland gymnast @McClenaghanRhys - the sustainable cardboard beds are sturdy! #Tokyo2020 https://t.co/lsXbQokGVE

The report in the New York Post was based on a tweet, apparently tongue-in-cheek, by US distance runner Paul Chelimo who said the cardboard beds were "aimed at avoiding intimacy among athletes".

"Beds will (only) be able to withstand the weight of a single person to avoid situations beyond sports," he tweeted.

It's not the first time the beds, which signal a commitment to sustainability, have come into question.

In January, manufacturer Airweave said they can withstand a weight of 200 kilos (440 pounds) and have been through rigorous stress tests, after Australian basketball player Andrew Bogut queried their durability.

"We've conducted experiments, like dropping weights on top of the beds," a spokesperson told AFP.

"As long as they stick to just two people in the bed, they should be strong enough to support the load."

Thousands of athletes will stay at the Olympic Village during the pandemic-delayed 2020 Tokyo Games, which start on Friday.

Despite warnings to "avoid unnecessary forms of physical contact", organisers are expected to hand out 160,000 condoms.

But the organising committee told AFP: "The distributed condoms are not meant to be used at the Olympic Village."

Instead they are supposed to be "brought back by athletes to their respective home countries and to help them support the campaign to raise awareness (about HIV/AIDS)", it added.