Kaylee McKeown's mum says she'll have a word with her daughter after the Australian sensation dropped an F-bomb on live TV. 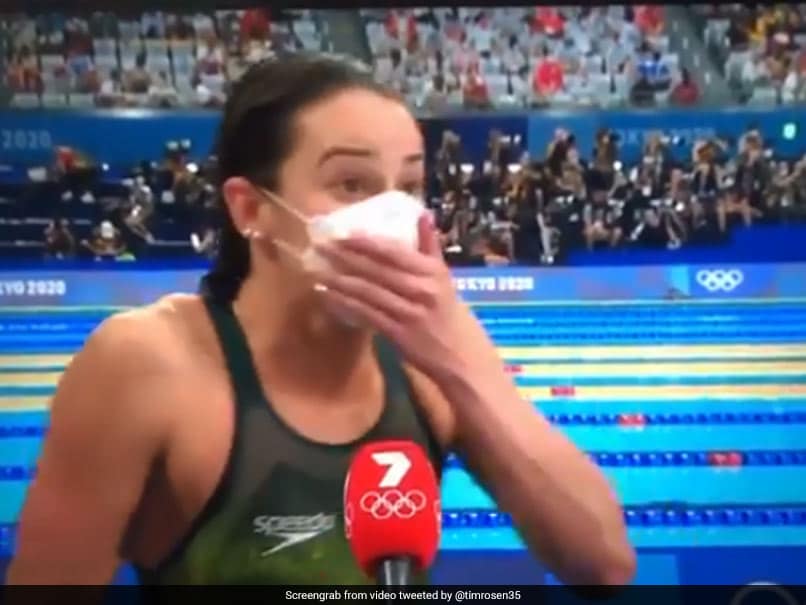 Kaylee McKeown's mum says she'll have a word with her daughter after the Australian sensation dropped an F-bomb on live TV after scorching to victory in the women's Olympic 100m backstroke on Tuesday. The 20-year-old touched in 57.47sec, fractionally outside her own world record, with Canada's Kylie Masse, the Rio bronze medallist, second in 57.72 and American Regan Smith third in 58.05. It capped a tough lead-up for McKeown, whose father Sholto died last year after a battle with brain cancer, aged just 53.

With emotions running high, she was asked by Australia's Channel Seven if she had a message for mum Sharon and big sister Taylor back home in Australia, given the difficult time they've endured.

McKeown uttered an expletive before covering her mouth after realising what she had said.

Her mother told Australian media: "Swearing on TV! I will have to have a word to her later."

After receiving her gold medal, McKeown was informed of her mum's comments but said she wasn't worried about getting in trouble.

McKeown has a tattoo on her foot that says "I'll always be with you" in honour of her father, and she said ahead of the Olympics that she used it as inspiration.

She is able to see it whenever she gets up for her backstroke starts and it helped drive her to swim a sensational race and smash Smith's world record at the Australian trials last month.

McKeown admitted that getting to Tokyo had been a rollercoaster but "everyone has a journey of their own and it just so happens that mine's been a really tough one".

"I wouldn't have it any other way because I don't think I'd be where I am today without all that happening," she added.

McKeown is earning a reputation for her flying finishes and despite Masse turning first at 50m, she powerfully brought it home.

"My legs were definitely hurting in the last 20," she said.

"I'm sure it would have been pretty noticeable on the TV but I trained for that and I knew that I had a really strong back end and a really good chance to be on the podium."

She is also targeting the 200m backstroke gold, having recently set the fourth-quickest time in history.

Comments
Topics mentioned in this article
Olympics 2020 Swimming Olympics
Get the latest updates on India vs Australia and check out  Schedule, Results and Live Score. Like us on Facebook or follow us on Twitter for more sports updates. You can also download the NDTV Cricket app for Android or iOS.