Bajrang Punia was one of India's brightest medal prospects heading into the Tokyo Olympics, and he delivered with a bronze medal. 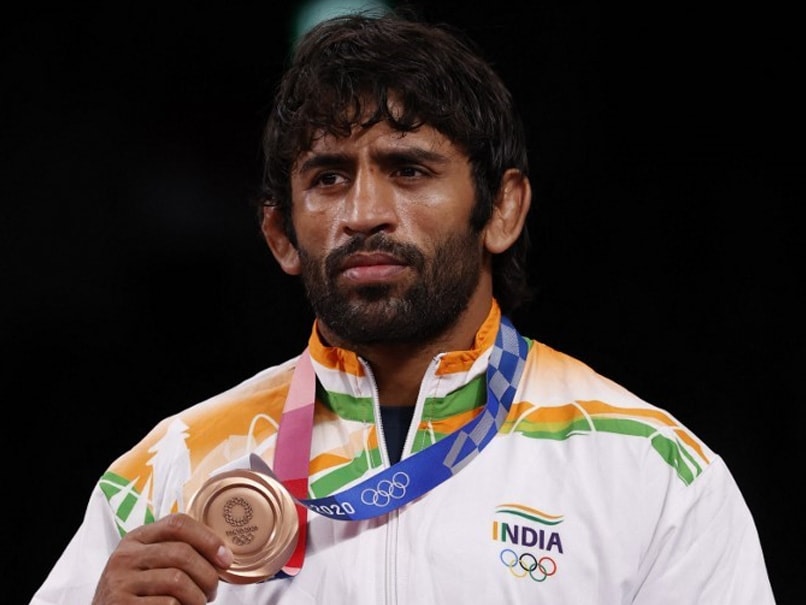 When Bajrang Punia sustained a knee injury during a bout at the Ali Aliyev Memorial tournament in Russia last month, many feared it would cost the Indian wrestler his Olympic dream. Fortunately for him and India, the injury wasn't as serious as initially feared and Bajrang recovered in time to be fit for the showpiece event in Tokyo. However, the injury troubles didn't completely end for Bajrang as he was seen wearing a strap around his right knee during his bouts in men's 65kg freestyle on Friday.

The Indian wrestler also struggled on occasions and took an unusually defensive stance at times, perhaps to protect his knee. Many watching on television also noticed him walking with a slight limp ahead of the quarterfinal bout against Iran's Morteza Ghiasi.

Bajrang held his ground in that bout, however, and won by fall in a tight contest to reach the semis where he lost to Azerbaijan's Haji Aliyev.

In the bronze medal match against Kazakhstan's Daulet Niyazbekov on Satutday, the 27-year-old Indian had no such trouble as he thoroughly dominated his opponent to win 8-0.

He also seemed to have recovered from the knock on his knee as there was no strap this time. It was the seventh wrestling medal for India in the history of the Olympic Games and the second in Tokyo.

Bajrang, who has won gold medals at the Asian Championships, twice, the Asian Games and the Commonwealth Games, apart from being a three-time medallist at the World Championships, was one of India's brightest medal prospects heading into the Tokyo Olympics.

Despite his knee troubles, Bajrang didn't disappoint in Tokyo and delivered at the biggest of stages. As part of his preparations for Tokyo, Bajrang had won the gold medal in Rome at the Matteo Pellicone Ranking Series in March this year. He then headed to Russia for a training stint and picked up the knock on his knee there.

Bajrang first grabbed eyeballs as a 19-year-old when he clinched a bronze in 60kg freestyle at the 2013 World Championships in Hungary. In 2018, he went on to win the silver in 65kg and followed it up with a bronze a year later.

In 2016, it was Yogeshwar Dutt who went to the Rio Olympics over Bajrang. However, with his Tokyo bronze, Bajrang made sure he had a debut to remember at the world's biggest sporting event.

Comments
Topics mentioned in this article
Olympics 2020 India Bajrang Punia Wrestling Olympics
Get the latest updates on Fifa Worldcup 2022 and check out  Fifa World Cup Schedule, Stats and Live Cricket Score. Like us on Facebook or follow us on Twitter for more sports updates. You can also download the NDTV Cricket app for Android or iOS.