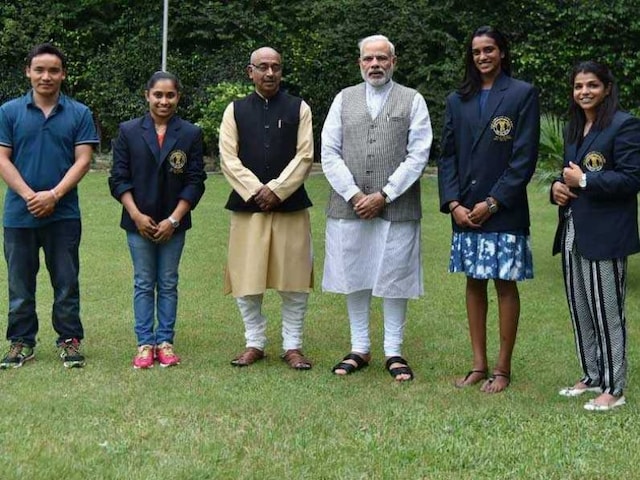 The PM greeted the athletes on the eve of the National Sports Day. Besides badminton star Sindhu and wrestler Sakshi, ace shooter Jitu Rai and trailblazing gymnast Dipa Karmakar were also in attendance.

All the four athletes will be conferred with the prestigious Rajiv Gandhi Khel Ratna Award by President Pranab Mukherjee on Monday. Sindhu scripted history by winning the silver in women's singles badminton while Sakshi took the bronze in women's 58kg freestyle category at the Rio Games.

In a first in Indian sports, Dipa finished fourth in artistic gymnastics at Rio. While Jitu has won over half a dozen medals in the past two years. "I showed him my medal and he was very happy. He congratulated me and said you did really well and made the country proud. That really made my day. It was a pleasure talking to him and I felt very happy," said Sindhu after meeting the PM.

Talking about her Olympic glory, she said, "It is great feeling to have won an Olympic medal. It was my dream and it has come true. I am very happy. I am thankful to everybody, Gopi sir, my parents. I am really thankful to the Government as they have been very supportive and also to the sponsors." When asked what did the Prime Minister tell her, Sakshi, who burst into the limelight with her bronze medal in Rio, said, "Prime Minister said to me 'maarna mat mujhe' (I hope you won't hit me) and I told him that we wrestlers are very aggressive on the mat but off it, we are very soft hearted."

Asked if the feeling of winning an Olympic medal has sunk in, Sakshi said: "I couldn't believe it when I was in Rio. But now it has started to sink in. I am getting a lot of love and everyone has made me feel very special."

The 23-year-old Sakshi, who was sporting a 'Rio 2016' pendent, said it was gifted to her by Gopichand's sister in Hyderabad earlier in the day.


A delighted PM Modi got clicked with all the athletes and wished them luck for future assignments. "Delighted to meet you @Pvsindhu1. Every Indian is so proud of what you accomplished," Modi wrote on his twitter handle, lauding the badminton star. About Sakshi, Modi wrote, "You are an inspiration for so many people @SakshiMalik. Keep making us proud with your achievements." Modi on Friday announced the setting up of a task force which will help to plan for the "effective participation" of Indian sportspersons in the next three Olympics, to be held in 2020, 2024 and 2028.

For Dipa, the PM said, "Congrats @DipaKarmakar. You have won the nation's hearts." He also praised Jitu's efforts and achievements. "Meeting the skilled, talented & determined @JituRai was wonderful. Best wishes for his future endeavours." Regarding the Dronacharya awardees, Modi tweeted, "A major role in the success of every athlete is the perseverance of their coaches...with Dronacharya Awards winners." The PM had words of praise and encouragement for the Arjuna, Dhayanchand and Tenzing Norgay awardees and greeted each and every athlete individually.

Comments
Topics mentioned in this article
Olympics 2016 Dipa Karmakar PV Sindhu Sakshi Malik Jitu Rai Olympics Olympics Olympics
Get the latest Cricket news, check out the India cricket schedule, Cricket live score . Like us on Facebook or follow us on Twitter for more sports updates. You can also download the NDTV Cricket app for Android or iOS.