Yogeshwar delighted at being recommended for Khel Ratna

London Olympics bronze medallist Yogeshwar Dutt, is extremely proud after his name was nominated for the prestigious Rajiv Gandhi Khel Ratna Award along with another medallist Vijay Kumar. 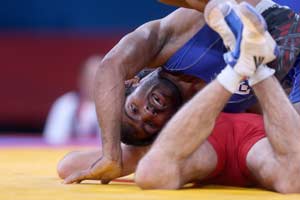 London Olympics bronze medallist Yogeshwar Dutt, is extremely proud after his name was nominated for the prestigious Rajiv Gandhi Khel Ratna Award along with another medallist Vijay Kumar.

"It is a proud moment for me. I am thankful to the people of the country and to all my well wishers who have shown great faith in me," the star grappler told PTI on Saturday.

"The immediate recognition of the feat is even more delightful. It will definitely motivate me to do well for my country in the future events," he added.

Yogeshwar clinched a bronze in the 60kg freestyle category at the just concluded London Games after defeating North Korea's Jong Myong Ri in the repechage round.

The 2010 Commonwealth Games gold medallist, lost to Russia's Besik Kudukhov in the pre-quarterfinals before making a strong come back in the repechage to win a bronze medal.

"It is not only a great thing for wrestling but also for the entire sports, as it will inspire the budding athletes to bring laurels to their country," Yogeshwar said.

The wrestler said the recognition will motivate many more girls to take up the combative sport.

"It is a great moment for me and for the women's wrestling. The award will motivate many more girls to take up the traditional sport," Geeta said.

"I got the state honour and now my name has been recommended for the prestigious Arjuna award, these type of recognitions play an important role in an athletes life. They motivate you to raise the bar of your performance every time you don the country colours," she added.

Geeta lost to Canada's Tonya Lynn Verbeek in her opening bout of the tournament and could not do much in the repechage round as well.

The 55kg freestyle grappler from Haryana lost her first bout of the repechage round to Tetyana Lazareva of Ukraine, to crash out of her first ever appearance in the mega event.

Geeta, who came to prominence after clinching a gold in the 2010 Common Wealth Games, is the third women grappler after Alka Tomar and Geetika Jakhar to be recommended for the Arjuna award.

"It is a matter of pride, that my name has been recommended for the country's highest sporting award," said Narsingh, who had to return empty handed from the Olympics after being ousted by Canada's Matthew Judah Gentry in his opening bout.

Comments
Topics mentioned in this article
Vijay Kumar Rahul Dravid Yuvraj Singh Gagan Narang Olympics 2012 India Yogeshwar Dutt Other Sports
Get the latest updates on ICC T20 Worldcup 2022 and CWG 2022 check out the Schedule, Live Score and Medals Tally. Like us on Facebook or follow us on Twitter for more sports updates. You can also download the NDTV Cricket app for Android or iOS.