A South Korean footballer will be excused military service as a reward for his Olympic performance despite controversially displaying a sign on a territorial dispute, an official said. 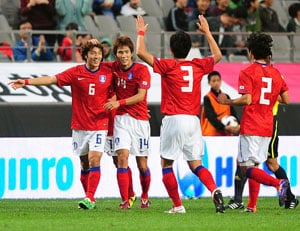 A South Korean footballer will be excused military service as a reward for his Olympic performance despite controversially displaying a sign on a territorial dispute, an official said.

Park Jong-Woo was barred from the medal ceremony after he held up a sign reading "Dokdo is our land" while celebrating his team's 2-0 win over Japan last Friday.

The Seoul-controlled islands, known as Dokdo in Korea and Takeshima in Japan, are the subject of a decades-old territorial dispute.

The row flared again last Friday when South Korean President Lee Myung-Bak made a surprise visit to the islands in the Sea of Japan (East Sea), hours before the match.

After a request from the International Olympic Committee (IOC), Park was not on the podium as his team-mates collected their bronze medals. The IOC, which bans political gestures at the Games, opened an inquiry.

The controversy raised questions about whether the 23-year-old would be exempted from about two years of military service, which is otherwise compulsory for all able-bodied South Korean men.

Sports officials exempted Olympic medallists as an inducement, and Seoul's sports minister said late Monday that Park would be allowed to skip the time in uniform whatever the result of the IOC probe.

"Our military law... says those who win third place or above at the Olympic games will be exempted from the service, and it never mentions an actual medal," Choe Kwang-Shik said in an interview with TV Chosun channel.

"He won the third place in Olympics football... as part of a team," Choe said.

A Korea Football Association (KFA) official said earlier that Park had taken the sign from a fan in the crowd after the match, stressing that the incident was not pre-planned.

IOC president Jacques Rogge was quoted as saying that Park's action was a clear "political statement" and the rule that bans any political expressions at the Olympics should be strictly honoured.

Rogge, in an interview in London with South Korea's JoongAng Ilbo newspaper, said an IOC disciplinary commission would decide what action to take against the player based on a report from football's world governing body FIFA.

The KFA meanwhile has said it expressed regret in an email to its Japanese counterpart body about the incident. But it denied Japanese media reports that it had made an apology.